A litil boke the whiche traytied and reherced many gode thinges necessaries for the . . . pestilence . . . made by the . . . Bisshop of Arusiens . . . [London], [1485?] Reproduced in facsimile from the copy in the John Rylands library. 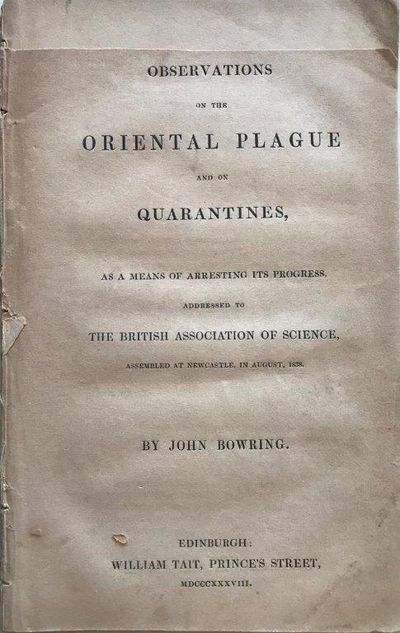 Observations on the Oriental Plague and on Quarantines, as a Means of Arresting Its Progress, Addressed to the British Association of Science, Assembled at Newcastle, in August, 1838.

8vo. [4], 45 pp. Disbound. Half-inch trimmed from title-page upper margin (not affecting text). Very good. First printing. Bowring was an English political economist, traveler, writer, polyglot, collector of coleoptera, and, in 1854, the 4th Governor of Hong Kong. "When at Akka, I heard of a case of plague, and was convinced, as I endeavoured to show in a paper on Oriental Plague and Quarantine, which I read at a meeting of the British Association, that plague cannot be communicated beyong the infected regions, and only in certain atmospheric conditions. I showed that, when the plague bro... View more info

Cristofano and the Plague; a study in the history of public health in the age of Galileo.

Cristofano and the plague; a study in the history of public health in the age of Galileo.

Cristofano and the Plague; a study in the history of public health in the age of Galileo.

The Black Death. Natural and human disaster in medieval Europe.

213 x 137 mm. 8vo. vi, 102 pp. Pencil underlining and marginalia, foxed. Modern quarter black morocco, German paste-paper boards, new end-leaves. Fine. FIRST EDITION. Der schwarze tod was Hecker's first important work on the history of the BLACK DEATH and the great epidemics of the Middle Ages. This volume contains a historical document describing the persecution, interrogation, and confession of Jews from Montreux, Evian, and other localities, who were accused of causing the Black Death of 1348 by poisoning drinking water and food. The defendants (one a famous surgeon from Thonon) are identi... View more info

A Short Discourse Concerning Pestilential Contagion, and the Methods To be used to Prevent it.

First edition. Small 4to. (198 x 123 mm) [8], 59 pp. decorative head- and tail-pieces, and factotum. Modern quarter black cloth over grey boards, gilt-stamped spine title. Contemporary ink ownership inscription on title-page, "Ex Libris Guilielmi Hillary A.D. 1722". Very good. [PZ41] FIRST EDITION. "Mead was asked for advice concerning the plague, and replied with the above tract. It was afterwards expanded into a book and is almost a prophecy of what was to develop as the English public health system. [Garrison & Morton]. "In 1719, in response to the public alarm over the out... View more info

"An Outbreak of Hepatic Veno-Occlusive Disease in North-Western Afghanistan."

The Great Plague: The Story of London's Most Deadly Year.

Bring out your dead; the great plague of yellow fever in Philadelphia in 1793.