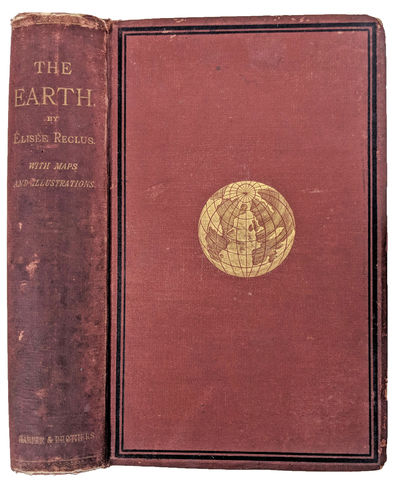 Thick 8vo. xi, [1], [13]-560 [of 573] pp. 24 colored maps (incl. frontis.), 232 [of 234] figs. Original gilt- and black-stamped brick red cloth; extremities worn. Ownership signature of A. Warren. As is. Rare. Translated by the late B. B. Woodward, edited by Henry Woodward. Reclus was an eminent French geographer and early anarchist, who in 1892 received the Gold Medal of the Paris Geographical Society despite being exiled from France for his political activism. Separated into 4 parts (The Earth as a Planet, The Land, The Circulation of Water, and Subterranean Forces) and 86 chapters, this vo... View more info

The Earth. A descriptive history of the phenomena of the life of the globe.