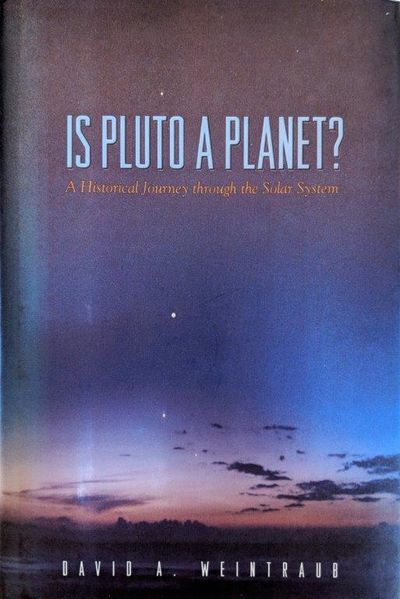 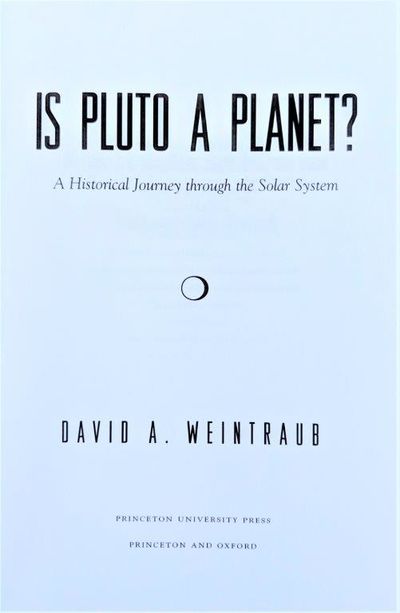 Is Pluto a Planet? A historical journey through the solar system.

By: WEINTRAUB, David A.

8vo. ix, 254 pp. Illus., index. Cloth, dust-jacket. Fine. ISBN 10: 0691123489 ISBN 13: 9780691123486 "On August 24, 2006, at the 26th General Assembly of the International Astronomical Union (IAU) in Prague, by a majority vote of only the 424 members present, the IAU (an organization of over 10,000 members) passed a resolution defining planet in such a way as to exclude Pluto and established a new class of objects in the solar system to be called "dwarf planets," which was deliberately designed to include Pluto. With the discovery of Eris (2003 UB313)--an outer solar system object thought to be both slightly larger than Pluto and twice as far from the Sun--astronomers have again been thrown into an age-old debate about what is and what is not a planet. One of many sizeable hunks of rock and ice in the Kuiper Belt, Eris has resisted easy classification and inspired much controversy over the definition of planethood. But, Pluto itself has been subject to controversy since its discovery in 1930, and questions over its status linger. Is it a planet? What exactly is a planet? Is Pluto a Planet? tells the story of how the meaning of the word "planet" has changed from antiquity to the present day, as new objects in our solar system have been discovered. In lively, thoroughly accessible prose, David Weintraub provides the historical, philosophical, and astronomical background that allows us to decide for ourselves whether Pluto is indeed a planet. The number of possible planets has ranged widely over the centuries, from five to seventeen. This book makes sense of it all--from the ancient Greeks' observation that some stars wander while others don't; to Copernicus, who made Earth a planet but rejected the Sun and the Moon; to the discoveries of comets, Uranus, Ceres, the asteroid belt, Neptune, Pluto, centaurs, the Kuiper Belt and Eris, and extrasolar planets. Weaving the history of our thinking about planets and cosmology into a single, remarkable story, "Is Pluto a Planet?" is for all those who seek a fuller understanding of the science surrounding both Pluto and the provocative recent discoveries in our outer solar system." "Well told. . . "Is Pluto a Planet?" . . . provides a readable historical account of our knowledge of the Solar System and the concept of what has been considered to be a planet. . . . Towards the end of this interesting book, Weintraub surprisingly concludes, despite the close analogy between the discovery of the asteroid and Kuiper belts, that we should retain Pluto as a planet by using three physical parameters of orbital characteristics, mass and roundness." -- Stuart Ross Taylor, Nature

Title: Is Pluto a Planet? A historical journey through the solar system.

Is Pluto a Planet? A historical journey through the solar system.