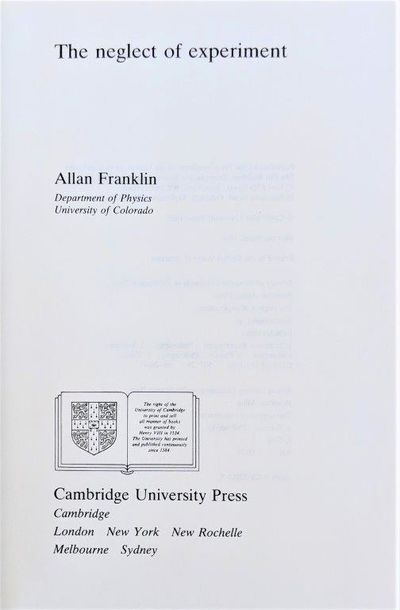 The Neglect of Experiment.

First edition. 8vo. xii, 290 pp. Figures, tables, index. Black gilt-stamped cloth, dust-jacket. Near fine. [br] ISBN: 052132016X "What role have experiments played, and should they play, in physics? How does one come to believe rationally in experimental results? The Neglect of Experiment attempts to provide answers to both of these questions. Professor Franklin's approach combines the detailed study of four episodes in the history of twentieth century physics with an examination of some of the philosophical issues involved. The episodes are the discovery of parity nonconservation ( or the violation of mirror symmetry) in the 1950s; the nondiscovery of parity nonconservation in the 1930s, when the results of experiments indicated, at least in retrospect, the symmetry violation, but the significance of those results was not realized; the discovery and acceptance of CP ( combined parity-charge conjugations, particle-antiparticle) symmetry; and Millikan's oil-drop experiment. Franklin examines the various roles that experiment plays, including its role in deciding between competing theories, confirming theories, and calling fo new theories. The author argues that one can provide a philosophical justification for these roles. He contends that if experiment plays such important roles, then one must have good reason to believe in experimental results. He then deals with several problems concerning such results, including the epistemology of experiment, how one comes to believe rationally in experimental results, the question of the influence of theoretical presuppositions on results, and the problem of scientific fraud. This original and important contribution to the study of the philosophy of experimental science is an outgrowth of many years of research. Franklin brings to this work more than a decade of experience as an experimental high-energy physicist, along with his significant contributions to the history and philosophy of science." First Edition.

Title: The Neglect of Experiment.

The Neglect of Experiment.