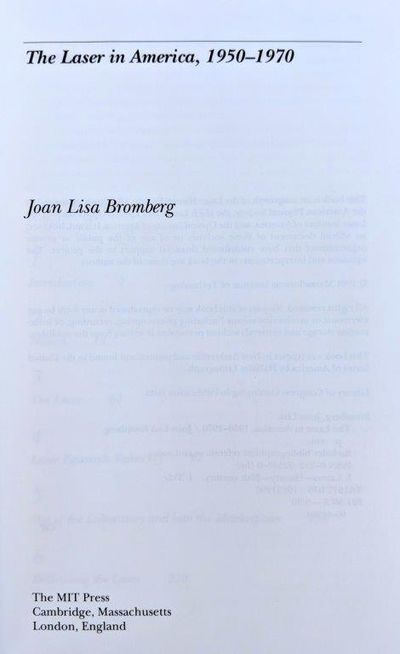 8vo. xiv, 310 pp. Illus., index. Black-stamped red cloth, dust-jacket; jacket corners a bit worn else fine. ISBN: 0262023180 "The laser has proved one of the most protean devices of our century. A mere thirty years after its invention, it already serves us in uses as varied as surgical instruments, "smart" bombs, printers, audio devices, telephone communication, cloth cutting, machining, and chemical research. In this book Joan Lisa Bromberg brings a historian's broad perspective to bear on the formative years of laser research in the United States. She demonstrates that, as lasers have become a means to probe the structure and changes of the physical universe, so the history of laser research constitutes a probe with which we can penetrate the structure of American science and engineering. The laser's history has been as multifaceted as its applications. To the heterogeneity of the groups that developed it, and the sheer size of the cast, must be added the lengthy and bitter disputes that have been fought over priority and patents. Bromberg does not set out to decide who is "right"; instead she concentrates on placing the action in the context of the postwar military, commercial, and academic interests that defined it. Starting with the maser, an innovative device for generating pure radio signals of centimeter wavelength, Bromberg describes the conceptual leap that vaulted four orders of magnitude to the laser with its pure beams of visible light. She shows how the operation of the first successful laser sent the pace of research skyrocketing in a research boom driven by a complex combination of professional rewards and institutional pressures. The book concludes with an epilogue by three laser scientistsâ€”Arthur H. Guenther, Henry Kressel, and William Krupkeâ€”that brings the technical history up to the present. Joan Lisa Bromberg directed the Laser History Project from 1982 to 1989 and is author of Fusion: Science, Politics, and the Invention of a New Energy Source, a history of the federal fusion energy program." â€“ Publisher.