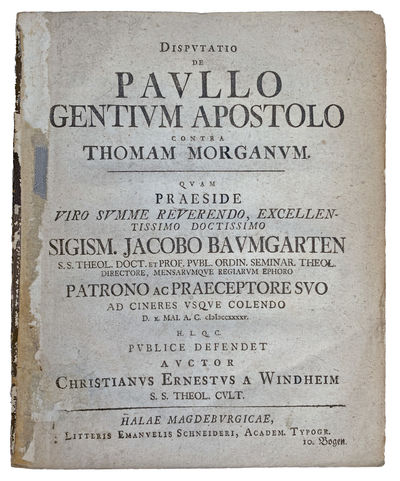 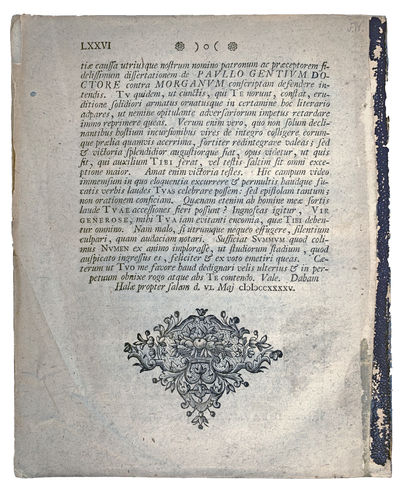 8vo. [4], LXXVI pp. Bound into modern library paper-backed boards with cloth tape; worn, original text-block clean with slightly soiled first and last pages, some edge wear, gutter of title torn. RARE. Very good (text). Baumgarten was a German protestant theologian and brother of the philosopher Alexander Gottlieb Baumgarten (1714-1762). He "was a follower of the philosophical teachings of Christian Wolff (1679-1754), and is regarded as a transitional theologian from the Pietism of Philipp Jakob Spener (1635-1705) and August Hermann Francke (1663-1727) to that of modern rationalism. He was a prodigious writer and published works on exegesis, hermeneutics, dogmatics and history. He was author of the first sixteen volumes of the Allgemeine Welthistorie (General World History), which after his death, was continued by his assistant Johann Salomo Semler (1725-1791)" (Wiki.pedia). Von Windheim was of noble birth, and studied philosophy, theology, and law at the University of Halle. He taught at the Universities of Helmstedt and Gottingen before becoming a professor of philosophy and oriental languages at the University of Erlangen. According to WorldCat, this piece is held by just 8 libraries, all in Germany. See: Martin Schloemann, Siegmund Jacob Baumgarten: System und Geschichte in der Theologie des Uberganges zum Neuprotestantismus (Forschungen zur Kirchen- und Dogmengeschichte), Gottingen, 1974.