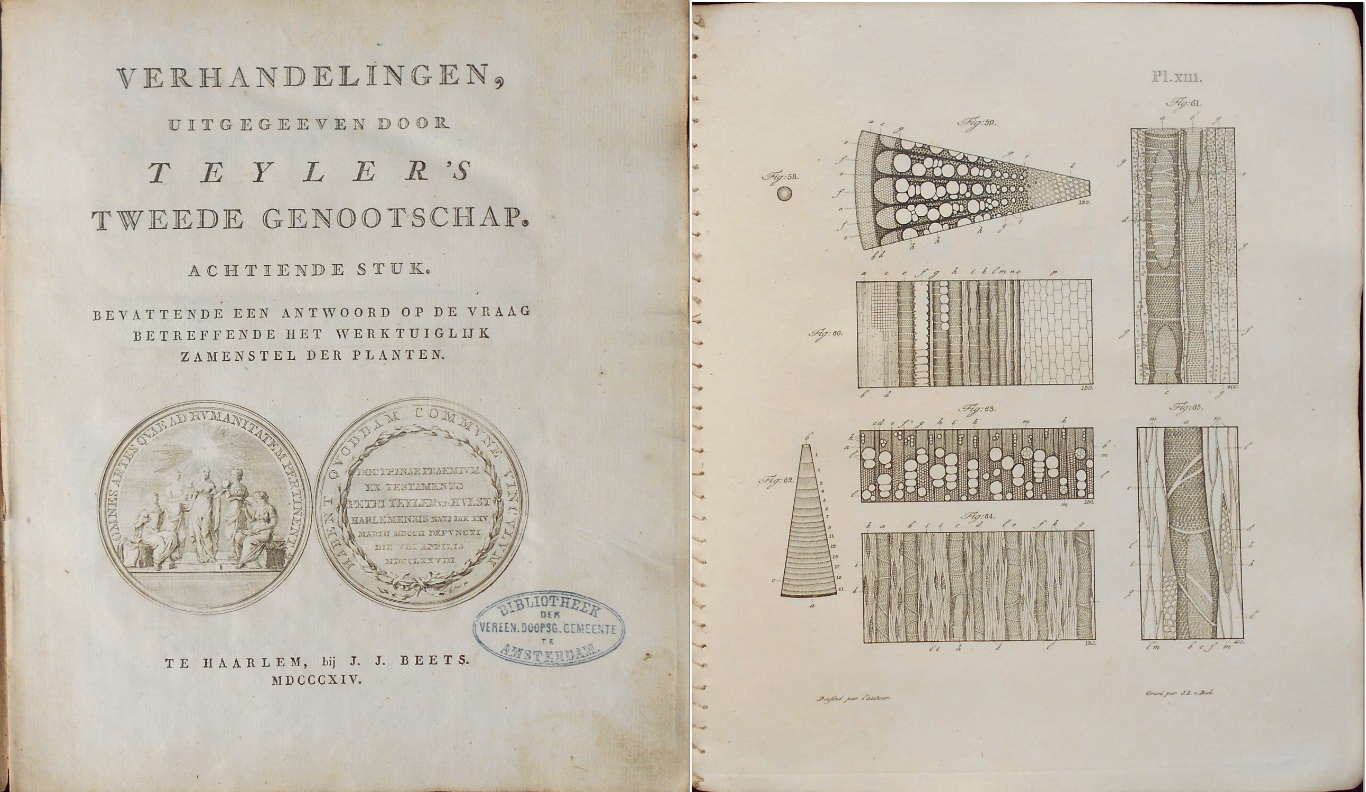 Series: Verhandelingen, Uitgegeeven door Teyler's Tweede Genootschap. Achtiende stuk. Bevattende een Antwoord op de Vraag betreffende het werktuiglijk zamenstel der planten. 4to. xxi, 345 pp. Series title, 22 engraved plates. Original boards, original printed spine label; spine worn, joints splitting. Original binding untouched. Bookplate. RARE. PIONEER OF CELLULAR BOTANY. This is the author's prize-winning essay for the Teylerian Society in Haarlem in 1812. The work is both a review of earlier botanical literature, but it also puts forth an early form of cell theory. ". . . Dietrich Georg Kieser (who published after the award of the Gottingen prize), is of interest for three reasons: first, because although he was a German and a professor at Jena, the definitive statement of his position, the Memoire sur l'Organisation des Plantes was written in French; second, because he wrote a widely read textbook, in German, in 1815, the Elemente der Phytotomie, and third, because he is mentioned by Dumortier, the discoverer of binary fission, as one of the principal proponents of the view that cells arise from subcellular granules. The Memoire sur l'Organisation des Plantes was submitted as a prize essay for a competition organized by the Teylerian Society on the subject of plant fine structure, and especially on the tubes and vessels to be found in plants. Kieser's essay won the prize and became very well known. It begins with a detailed review of the work of [Robert Hook, Marcello Malpighi, Nehemiah Grew (1641-1712), Leeuwenhoek, Henri-Louis Du Hamel du Monceau, Sir John Hill, Martin Van Marum, Mustel, Johann Hedwig, Jean Senebier, Christian Sprengel, Ludolph Christian Treviranus, Heinrich Friedrich Link (1767-1850), Karl Asmund Rudolphi (1771-1832) (the "father of helminthology") and Mirbel], and it is, in this respect, one of the most useful of nineteenth century compendiums of botanical history. As for Kieser's own ideas on the organization of plants, he takes the view that 'Les plantes sont composees en grande partie de cellules, qui forment un tissue cellulaire.' ('Plants are composed in large part [that is, not entirely] of cells, which form a cellular tissue.') He believed that these cells arose from an infinity of tiny, transparent globules to be found in the sap. These globules were through to enlarge, cohere and, as a result of external pressures, assume their final shape. . . . He regarded the cells of lower plants, which retailed their ellipsoidal shape, as the most primitive forms. In higher plants, however, the cells were forced by reciprocal pressures into a shape that he now defined more specifically as a dodecahedral rhombus. There pressures were said to obey strict mathematical laws, but how the forces were exerted and what mathematical laws they obeyed are not stated [referring to his later work, Elemente der Phytotomie]. . ." Henry Harris, The Birth of the Cell, 2000, - page 45. Stevens cites Kieser's work as a model of the post-Linnean treatises that sought to organize and categorize major fields of the natural sciences. "The various shades of meaning it encompassed prefigure many of the questions â€” evolutionary, genetic, developmental, mechanistic, functional, anatomical, and physiological â€“ that would be addressed in biology later in the nineteenth century." Kierser links Lamarck and Treviranus to using terms that organize biology, as with Kieser, but they also do not address "organization" specifically. Dieterich Georg KIESER (also Dietrich Georg von Kieser, 1779 - 1862), born in Harburg, Germany, studied medicine at the Universities of Wurzburg and Gottingen, receiving his doctorate in 1801. He was appointed director of a Jena mental hospital in 1816. The following year he began teaching psychiatry at the university and opened a private sanatorium. For most of his career he was a professor at the University of Jena, where from 1824 to 1862. Kieser was also a learned scholar of natural sciences. While working as a professor at the University of Jena, Kieser operated a private ophthalmology clinic from 1831 to 1847, and from 1847 until 1858 he was director of the Grand Ducal Mental Hospital. He was an advocate of balneology, and beginning in 1813 was a physician at the therapeutic spas at Heilbad Berka. With Adam von Eschenmayer (1768-1852) he published the 12-volume Archiv fur den thierischen Magnetismus (Archive for Animal Magnetism), for which he contributed numerous articles. He found positive or negative charges everywhere, dichotomies rules the cosmos. "Organs within one and the same body were believed to magnetize each other." [Wallace-Gach]. He died in Jena. References: See: Peter Francis Stevens, The Development of Biological Systematics: Antoine-Laurent de Jussieu, Nature, and the Natural System, Columbia University Press, 1994 - page 198. Edwin R. Wallace, John Gach, History of Psychiatry and Medical Psychology: With an Epilogue on Psychiatry and the Mind-body Relation, Springer-Verlag, 2008, pages 342-43.