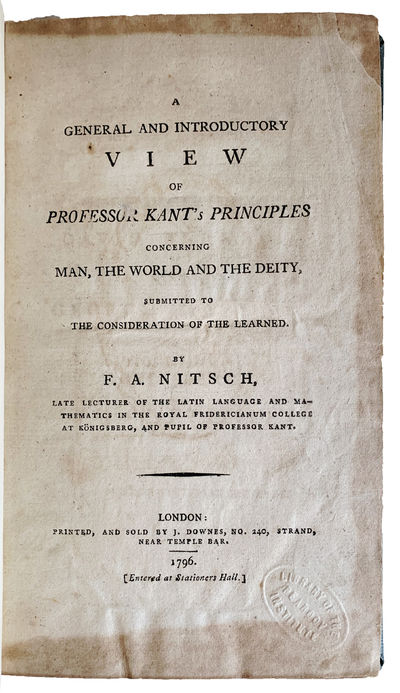 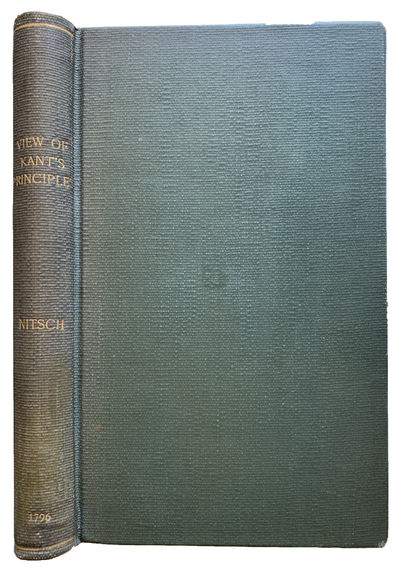 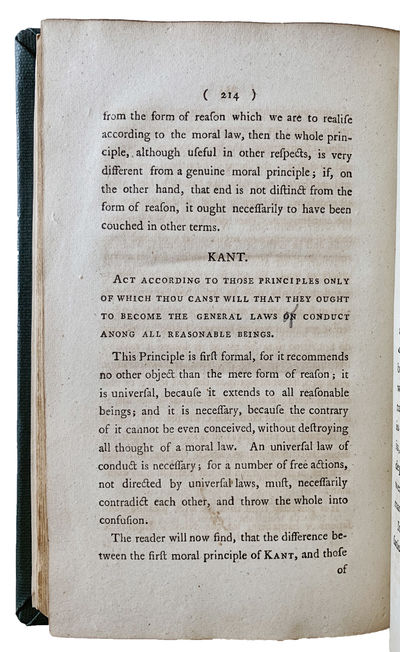 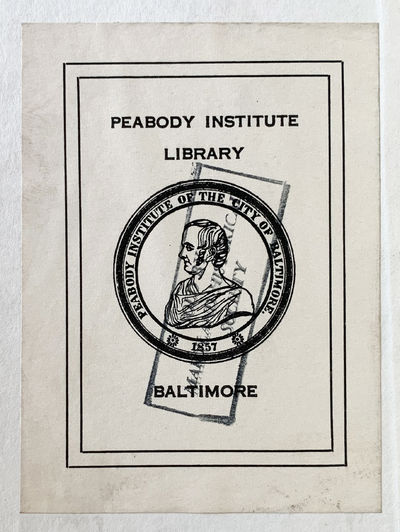 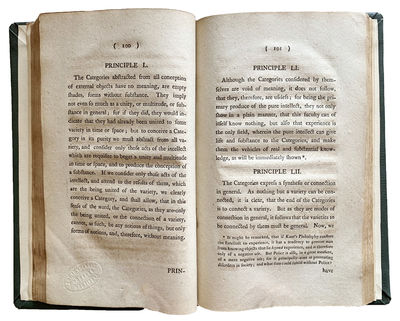 A General and Introductory View of Professor Kant's Principles Concerning Man, the World, and the Deity, Submitted to the Consideration of the Learned.

8vo. [iv], 234 [miss-numbered as "134"] pp. Olive library buckram. Peabody Institute Library, Baltimore, bookplate, with related inventory rubber stamp (tp verso) and embossed stamp. Very good. RARE. First edition. The first English Language book on Kant's philosophy. Friedrich August Nitsch (c.1767â€“1813?) was born in Gumbinnen in East Prussia (now Gusev, Russia) and died around 1813. "Published in London. Nitsch, a German from Konigsberg, had spent about three years in London, where he gave courses of lessons on Kant's philosophy. In this work, "the author expounded Kant's system in its two parts, the theoretical and the practical, according to the method of exposition derived from Reinhold, in particular from Versuch but also from the Briefe. His dependence on Reinhold's Versuch is evident also in the content. Nitsch himself admitted this both in the introduction to the book (p.7) and also in a letter of 25 July 1794 to Kant, the only one that has been preserved from an exchange of letters which covered a period of more than four years, in which, as well as informing him of the efforts that he was making to spread the critical system in England, he let him know that he was writing, in English, an 'Einleitung' to the Kantian system 'according to Reinhold'." Giuseppe Micheli, 'The Early Reception of Kant's Thought in England 1785-1805' in Kant and his Influence, edited George Macdonald Ross and Tony McWalter." â€“ 18th century bibliography. References: See: The Dictionary of Eighteenth-Century German Philosophers, Edited by Heiner F. Klemme and Manfred Kuehn. Oxford University Press, 2010. First Edition.

Title: A General and Introductory View of Professor Kant's Principles Concerning Man, the World, and the Deity, Submitted to the Consideration of the Learned.

A General and Introductory View of Professor Kant's Principles Concerning Man, the World, and the Deity, Submitted to the Consideration of the Learned.