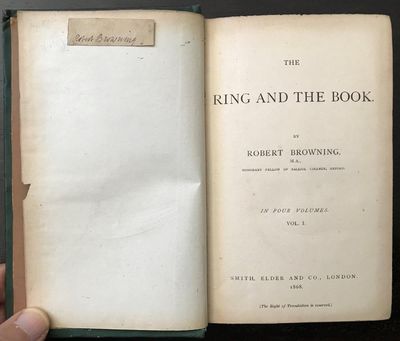 The Ring and the Book.

4 volumes. 8vo. [iv], 245, [1], [ads 1], [1 blank]; [iv], 251, [1]; [iv], 249, [1]; [iv], 235, [1] pp. Occasional light scattered foxing to free end-leaves. Original black-stamped green beveled cloth, gilt-stamped spines, by Harrison [59 Pall Mall, bookseller to the Queen], in quarter gilt-stamped calf over blue cloth slipcase; Vol. 3 rear hinge cracked with light front pastedown soiling, Vols. 1 & 2 hinges cracked. ROBERT BROWNING'S SIGNATURE tipped-in Vol. I opposite title-page. Ownership signatures of W. J. [--- Ruex?] Settle (Sherborne, Dorset , Feb. 21, 1869) and F. Rowlandson. OWNERSHIP SIGNATURES OF E. M. FORSTER Vol. 2 to free front end-leaf and title-page. Attractive copy. Very good. FIRST EDITION of Browning's famous work, with Roman numerals on volumes I & III spines and Arabic on the remaining vols. 2 & 4. WITH A CUT-SIGNATURE TIPPED-IN OF ROBERT BROWNING. The "ring" from this work's title is the wedding band Browning gave to his wifeâ€”after her death, he wore it on a chain around his neck. The book referenced by the title is, according critic Charles Wesley Hodell, a soiled collection of documents relating to a Franceschini murder trial that occurred in Florence in 1698, likely assembled by a lawyer at the time, that Browning purchased in the marketplace of San Lorenzo for 1 lira. PROVENANCE: W. J. [--- Ruex?] Settle (Sherborne, Dorset â€“ F. Rowlandson â€“ "E. M. FORSTER": possibly Edward M. Forster (1879-1970) "was an English novelist, short story writer, essayist and librettist. He is known best for his ironic and well-plotted novels examining class difference and hypocrisy in early 20th-century British society. Forster's humanistic impulse toward understanding and sympathy may be aptly summed up in the epigraph to his 1910 novel Howards End: 'Only connect. . .'. His 1908 novel, A Room with a View, is his most optimistic work, while A Passage to India (1924) brought him his greatest success" (Wikipedia). While Forster did not personally know Browning, as he was still a child at the time of Browning's death, he held him in high regard. His reading list at King's College included "Paradise Lost. . .some Kipling, and a good deal of Robert Browning and Christina Rossetti" (Sarker, p. 22). Note: Sherborne School, Dorset, is the same school attended by Alfred North Whitehead, Alan Turing, Lord Swynnerton, John Cowper Powys, Jeremy Irons, Cecil Day-Lewis, etc. Note: Count Guido Franceschini was found guilty of the murders of his young wife Pompilia Comparini and her parents, having suspected his wife of having an affair with a young cleric, Giuseppe Caponsacchi. "The poem is based on a real-life case. Under Roman law at the time, trials were not held in open court but rather by correspondence, whereupon each witness was required to submit a written statement for future adjudication. Browsing in a flea market in Florence in 1860, Browning came across a large volume of these written statements relating to the 1698 Franceschini case, and bought it on the spot. This volume - later known as the Yellow Book, after the colour of its aged covers - struck Browning as an excellent basis for a poem, but he was unable to get any further than the basic idea and often offered it as a subject to other writers, notably Alfred Tennyson, upon which to base a poem or novel. Luckily for posterity, there were no takers, and following his wife's death and his return to England, Browning revived his old plan for a long poem based on the Roman murder case almost eight years after the idea had first struck him." Hodell, Charles Wesley. An Essay On Robert Browning's The Ring And The Book. Whitefish, MT: Kessinger, 2006; Sarker, Sunil Kumar. E. M. Forster's A Passage to India. New Delhi: Atlantic, 2007. First Edition.

Title: The Ring and the Book.

The Ring and the Book.