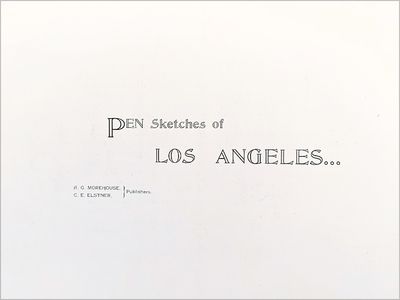 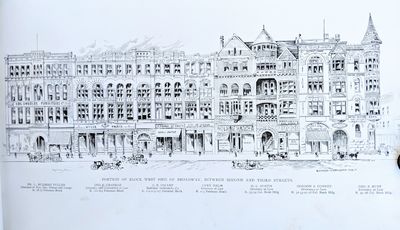 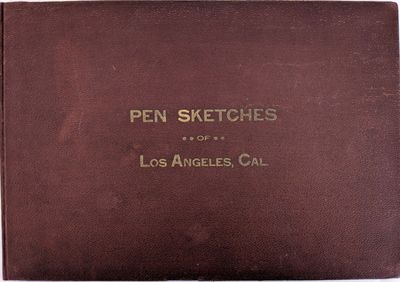 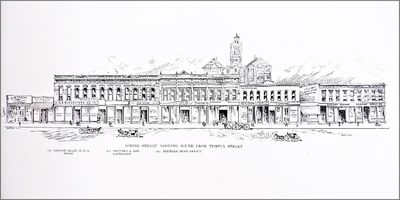 Large oblong 4to. Not paginated. 36 full page illustrations of Los Angeles with related adverts on the opposite pages, 15 full page photos of individual Los Angeles Buildings. Original full gilt stamped brown cloth; inner hinges neatly repaired. Early inscription to Arthur Ellis, 1927. Early Ownership signature of Sam Behrendt, Los Angeles, 1925. Fine. EXTREMELY SCARCE. BEAUTIFUL COPY OF THIS VERY RARE LOS ANGELES SKETCHBOOK. With 36 full-page plates depicting early Los Angeles buildings. This unequaled record of the central Los Angeles business district, was created, according to the preface, in order ". . .to show the active business portions, together with a few of the more pretentious of the office buildings and manufactories". Arthur Ellis was a founding member of the Zamorano Club. Provenance: Sam Behrendt, the son of Los Angeles pioneer Caspare Behrendt* (d.1913) (the discovery of gold brought him to California), "acquired his education in the Spring Street and Eighth Street Grammar Schools at Los Angeles, and after he was fifteen years old spent one year in a business college. For to years he clerked in a grocery and cigar business, and remained there until 1900. Selling out and returning to Los Angeles, he became connected with the San Gabriel Electric Company, later merged with the Pacific Light and Power Company. He was employed as a collector and later solicited new contracts for three years. On leaving that corporation, Mr. Behrendt entered the insurance business for himself, and in 1907 took in Mr. I. O. Levy as a partner under the name Behrendt-Levy Company, and they incorporated the business in 1908. This is a general insurance agency and the establishment now employs twenty-one people. Mr. Behrendt is also a director of the Union Bank and Trust Company and a director of the Shiff, Lang & Company." He is a member of Hollenbeck Lodge no. 119, a Scottish Rite Mason, and Shriner, Elk, Corona Parlor of the Native Sons of the Golden West, B'nai Birth, Los Angeles Athletic Club, San Gabriel Country Club, City Club, Chamber of Commerce, Merchants and Manufacturers Association, and the Friars Club of New York. At Oakland, Ca., he married Sadie Mosbacher. Together they had a son George (b.1904). Behrendt was also known to be a friend of film star Roscoe "Fatty" Arbuckle, holding a dinner in his honor at the Alexandria Hotel February 12, 1917. â€“ McGroarty. John Steven McGroarty, Los Angeles from the mountains to the sea: with selected biography, vol. II, p. 422; James Miller Guinn, A history of California and an extended history of Los Angeles and . . . 1915, page 124; Harris Newmark, Sixty Years in Southern California.