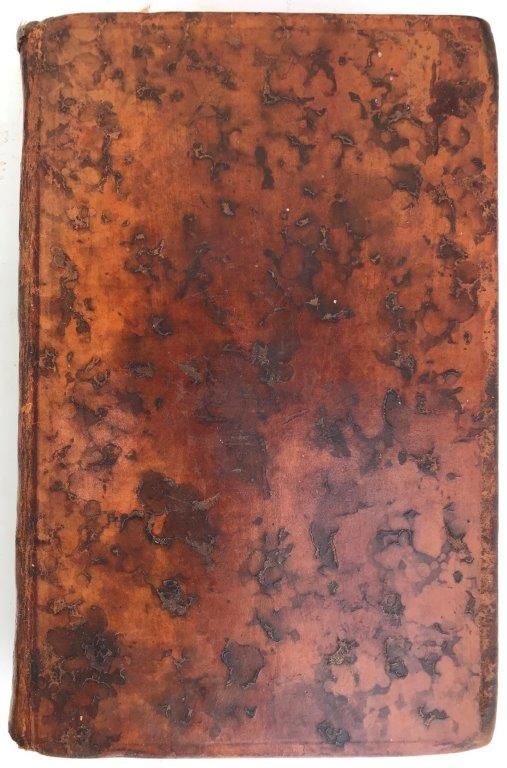 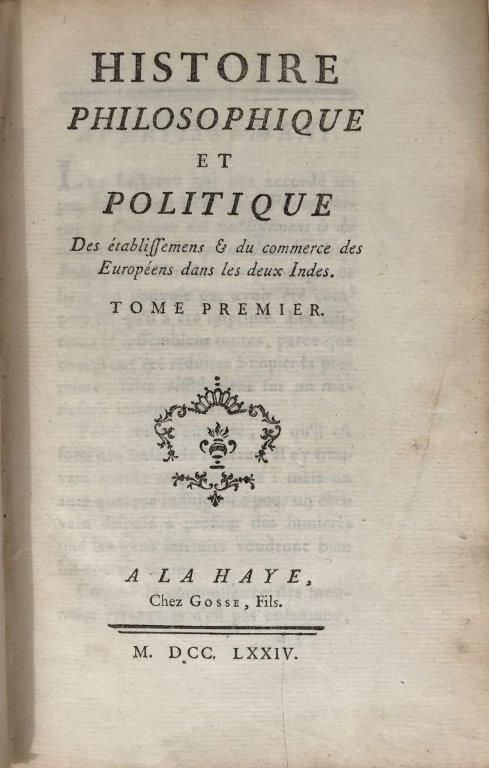 7 volumes. 8vo. xii, 4, 604; viii, 434; xii, 612; viii, 417, [1]; xii, 416; viii, 406; viii, 448 pp. Half-titles (vols. 1, 3, 5, 7), 7 engraved plates, 7=4 [meaning 7 large folding engraved maps are present, as issued, of which 4 are unique and 3 are duplicates, again as issued] (vols. 1 & 2 and 3 & 4 have the same two maps, each marked "Tome 1&2" - or "Tome 3&4"), V: Gulf of Mexico; VI & VII: (2 copies) large folding eng. map of North America, errata. Original full mottled calf, ornate gilt spines, dual leather gilt-stamped spine labels; some wear to extremities. Unidentified rubber-stamps (on half-title or titles) [purple: feathered crown, over two crossing feather pens, a ribbon draped over a rod, with the word: ----bekholes(?)]. Very good set, lacking the engraved portrait of the author, but complete with all the text and 7 plates and 7 maps. "Man will never be free until the last king is strangled with the entrails of the last priest" Denis Diderot. EARLY EDITION, first issued in 1770, of this classic that opens with the discovery of North America, then thought of as the New World, while looking for passage to India. This edition was edited and improved over previous editions. The work is embellished with 7 historiated "frontispiece" elaborately engraved plates, located at the beginning of the narrative, show indigenous peoples in natural settings. The 4 folding engraved maps depict the entire world, North America (including Hudson Bay and Greenland to the north and reaching as far south as the Gulf of Mexico, and east to the western part of Africa), and the Gulf of Mexico region (reaching to the northern part of S. America). 3 additional maps repeat three of the original maps. "The book examines the East Indies, South America, the West Indies, and North America. The final chapter comprises theory around the future of Europe as a whole. Raynal also examines commerce, religion, slavery, and other popular subjects, all with a perspective from the French Enlightenment." Wikip. Born April 12, 1713, at Saint-Geniez in Rouergue, Raynal received a Jesuit education at Pezenas. "Collaboration was crucial to Raynal's greatest achievement as an editor and author. It was Raynal, after all, who shepherded into print one of the eighteenth century's most influential collective efforts, the massive Histoire philosophique et politique des etablissements et du commerce des Europeens dans les deux Indes, a philosophical and political history . . . Printed in three "authorized" versions edited by Raynal (1770, 1774, and 1780), the Histoire des deux Indes was the work of a score of authors, among them Denis Diderot, Jean le Rond d'Alembert, Charles Pinot-Duclos, and Paul-Henri Thiry, The Baron d'Holbach (1723-1789). Diderot and d'Holbach denounced the tyranny of despotism, which touched a nerve from the French monarchy, resulting in the book being condemned by the French parliament in 1781. Raynal was exiled from France and in fact an order was issued for his arrest even though his name did not appear on the first edition of the work. The Histoire des deux Indes attempted a comprehensive history of the contemporary European colonial enterprise in the Far East and the Atlantic world. Beginning with the fifteenth-century Portuguese explorations and culminating with a sweeping analysis of all colonial powers in the eighteenth century, the Histoire laid bare the progress of conquest for each European nation and its trading companies. Often the 'progress' translated into the abuses made possible by the disproportionate use of force and state-sponsored trading monopolies. No colonial power was spared. . ." Bill Marshall, ?Cristina Johnston, France and The Americas: Culture, Politics, And History, ABC-CLIO, (2005), p. 978. "Diderot was one of the most forceful critics of European colonization. In his contributions to Raynal's Histoire des deux Indes, he challenges the view that indigenous people benefit from European civilization and argues that the European colonists are the uncivilized ones. He claims that culture ("national character") helps to inculcate morality and reinforces norms of respect, but these norms tend to dissipate when the individual is far from his country of origin. According to Diderot, colonial empires frequently become the sites of extreme brutality because the colonists are far away from legal institutions and informal sanctions and this weakens the habits of restraint, exposing natural man's full instinct for violence (Muthu 2003)." Margaret Kohn, "Colonialism," Stanford Encyclopedia of Philosophy. Feugere, Anatole, Bibliographie critique de l'abbe Raynal. Angouleme: Impr. ouvriere, 1922. See: Censure de la faculte de theologie de Paris. 1774; Morley, John, Diderot and the Encyclopedists, London: Macmillan, 1886. First Edition.