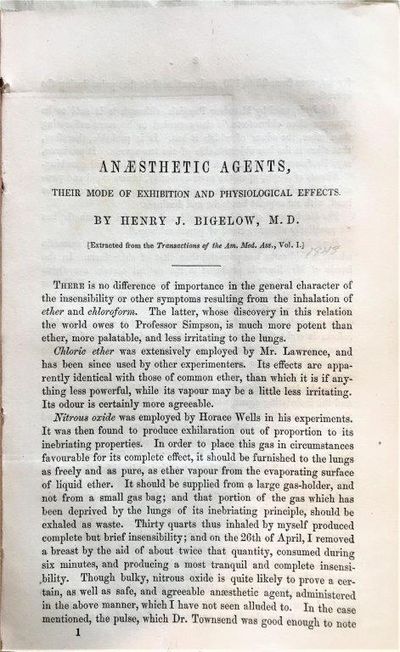 "Anaesthetic Agents, Their Mode of Exhibition and Physiological Effects," [Extracted from the Transactions of the Am. Med. Ass., Vol. I.].

Offprint. Series: Transactions of the American Medical Association. Sm. 8vo. 18 pp. Contemporary plain brown wrappers, probably as issued; extracted from a bound volume, thus a remnant residue affecting spine. Front cover library withdrawal rubber stamp [possibly: "Concord Free Public Library"]. Very good. First SEPARATE OF BIGELOW ON ANESTHESIA, the journal form has an entirely different pagination, being pages 197-214 in the 1847 issue. We believe this is the original offprint form of this paper by Bigelow. There are several clear differences between this offprint form and the journal issue is (1) the pagination for the offprint is 1-18 (for the journal it is 197-214), and (2), the journal issue has "C.-1. at the head of the paper, and foot of the page has no page number whereas the offprint form adds the line "[Extracted. . . ], raises the title text higher on the page and includes a page number "1" at the bottom left margin. There is no known textual difference. "The committee considered in detail the various anesthetic agents. According to the report, some surgeons were afraid to use anesthesia in their surgical operations, feeling that the advantages afforded by the relief of pain might be offset by the risks involved. [However,] even at this early date, authors of this report felt that a large group of surgeons were wholly in favor of anesthesia. The authors did, however, admit that some surgeons would restrict the use of these agents to severe operations, after the introduction of ether anesthesia in Boston it was not until several months later that the method became generally popular in other communities in the United States. The favorable reports of its use in Boston and in Europe made for the more extensive use in American communities in 1847 and 1848. The dangers of etherization were also considered. In some cases it was thought that convulsions, prolonged stupor, intense cerebral excitement, alarming depression of the vital powers and asphyxia apparently were caused by the inhalation of ether and chloroform. Secondary effects attributed to inhalation in a few cases were bronchitis, pneumonia and inflammation of the brain. Interestingly enough, according to this report (p. 190), ether was considered to be a safer drug than chloroform" (Keys, pp. 36-47). "Dr. Bigelow was the unflinching advocate of sulphuric ether as the only safe anesthetic: and his unshaken opinion had a very wide and lasting influence. Bigelow instituted important and productive experiments in anesthesia. He inhaled new and untried anesthetic agents. He made practical and original studies of asphyxia, and thoroughly established the fact that insensibility from the inhalation of nitrous oxide gas is largely due to asphyxia. He was also the first to show that anesthesia by nitrous oxide could be accomplished with certainty only by the use of a large volume of gas; and thus made the way plain to Colton and others for its successful adoption in tooth-pulling, and in brief surgical operations" (Mayo, p. 603). Bigelow (18181890), born in Boston, studied at Harvard from 1833, and became a prominent surgeon and Professor of Surgery at Harvard University. "His 1846 article, 'Insensibility during Surgical Operations Produced by Inhalation' detailed the discovery of ether anesthesia and was selected by readers of the New England Journal of Medicine as the 'most important article in NEJM history' in commemoration of the journal's 200th anniversary." "He was a vocal opponent of vivisection and was best known for his description of the hip joint and for a technique for treating patients with kidney stones." Wikip. REFERENCES: Keys, Thomas, The History of Surgical Anesthesia, Park Ridge, IL: Wood Library Museum of Anesthesiology, 1996; Fulton & Stanton, Anesthesia, VII, p. 191; Mayo, William J. "In the Time of Henry Jacob Bigelow." JAMA, Vol. 77, No. 8. 1921. 597-603 pp.

Title: "Anaesthetic Agents, Their Mode of Exhibition and Physiological Effects," [Extracted from the Transactions of the Am. Med. Ass., Vol. I.].

"Anaesthetic Agents, Their Mode of Exhibition and Physiological Effects," [Extracted from the Transactions of the Am. Med. Ass., Vol. I.].