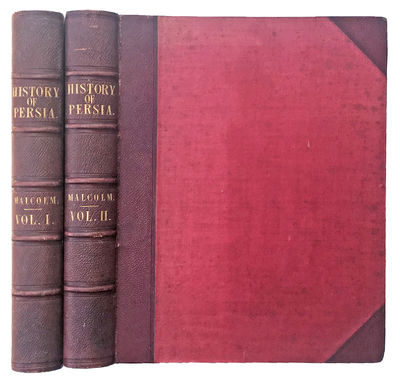 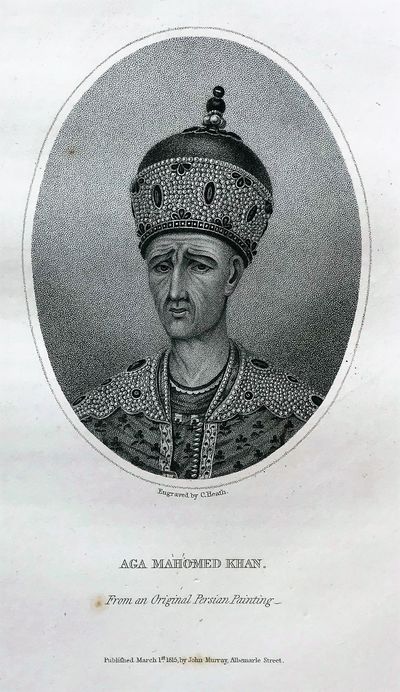 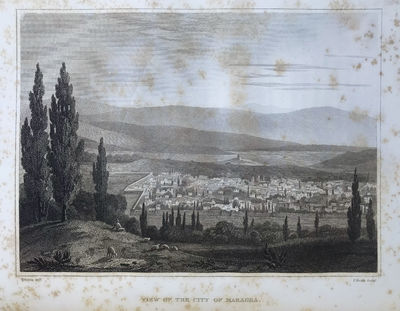 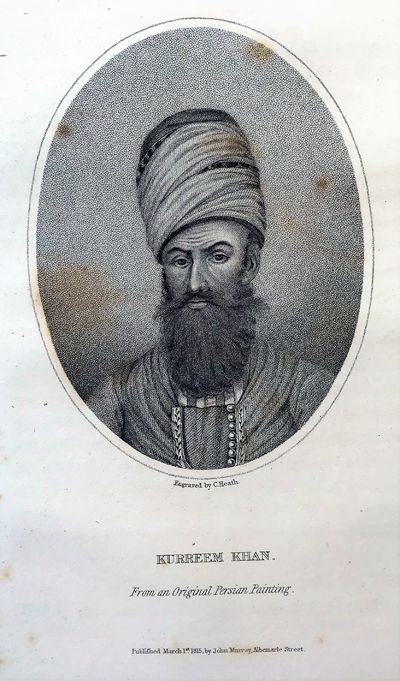 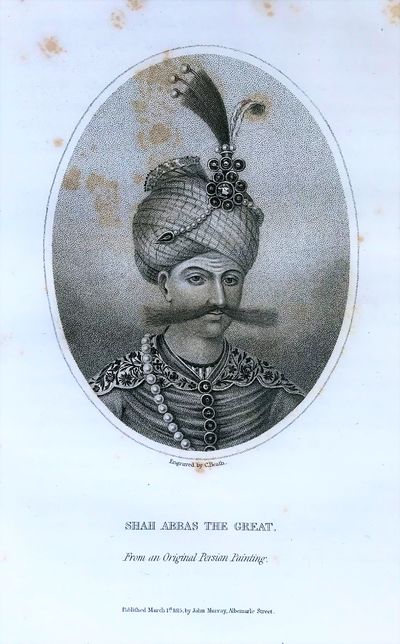 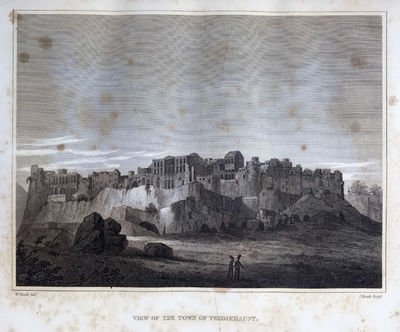 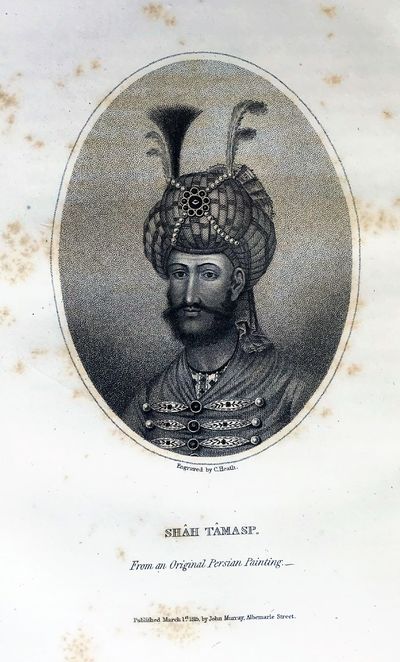 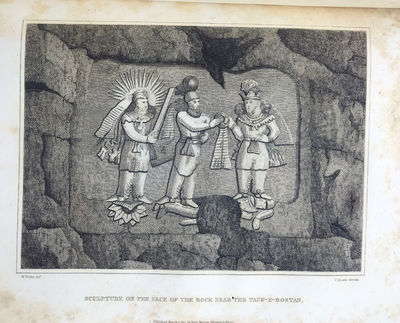 The History of Persia, from the Most Early Period to the Present Time: containing an account of the Religion, Government, Usages, and Character of the Inhabitants of that Kingdom. In two volumes.

Two volumes. Large 4to. xxii, [ii], 644; vii, [i], 715 pp. Large folding engraved "Map of Persia and Adjacent Countries . . .," 22 engraved plates, index; some offsetting to title, occasional foxing. Original half red morocco, raised bands, blind and gilt-ruled covers, red cloth sides, endpapers and all edges marbled. Generally a handsome and pleasing copy of this rare work. INSCRIBED "Hon. Robert Curzon, K.L.S., K.C., H.B.M., Commissioner at Erzeroom, 1843. With the Curzon label laid in. Inserted is a British newspaper clipping, "Our Relations With Persia. Mrs. Eastwick said the question of transferring the control of our relations with Persia to the India Office, to which he would call attention, was carefully weighed by a Select Committee of this House last Session." First edition of one of the earliest substantial British histories of Persia (the other being written 59 years later, Clements Markham, General Sketch of the History of Persia, 1874). ONE OF THE KEY SOURCES FOR HISTORY OF ORIENTALISM & THE BRITISH INFLUENCE. It contains a great deal of information related to ancient Persian rulers up through its 1815 publication, with the Qajar period being most thorough. Percy Sykes, calling this volume "valuable" wrote, "Malcolm was received [in 1810] with extraordinary marks of esteem and friendship, and his fine character, his justice, and his knowledge of the world impressed the Persians so much that all Englishmen in Persia still benefit from the high qualities displayed by their great representative. It was in his honour that the Persian decoration, "the Lion and the Sun," was inaugurated." (p. 308). [Sir Percy Sykes, A History of Persia, vol. 2]. / This work also represents one of the most important early and influential efforts on establishing an interest in the history of orientalism as well as the establishment of British rule in India and expanding its sphere of influence in the region. "With his History, Malcolm used firsthand experience and unfamiliar Persian and Indian sources to critically assess Persian despotism as a form of government. In writing a history of an ancient Eastern country using standards typically applied to the study of Western societies, Malcolm developed a framework for understanding oriental history that reflected contemporary developments in historical writing." (p.83). With this work Malcolm had hoped to repair his reputation. He wanted to be recognized as the leading British authority on Persian affairs and history. [See: Jack Harrington]. / The plates include a fine map of Persia, deities from the Dabistan, Ruins of Shahpoor, excavation at Tauk-e-bostan, City of Maragha, Shah Tamasp, Shah Abbas the Great, Nadir Shah, Kurreem Khan, Yezdikhaust, Aga Mahomed Khan, Futteh Aly Shah, Palace at Isfahan, Palace at Char-Bagh, Tombs of Esther and Mordecai, Tomb of Avicenna, Mountain of Kaufelan Koh, Mountains of Kurdistan, Family of the Ghishkee Tribe. / Malcolm, Sir John (1769-1833), of Warfield, nr. Wokingham, Berks. "Malcolm rose from humble origins to become one of the most distinguished administrators of British India." He learned the Persian language and took a career in politics. Lord Wellesley sent him to Persia in 1799 and he became the first British envoy since the sixteenth century, for which his assignment was to divert the Afghans, check French influence and promote British trade. By 1801 he was presented to the Shah and made pacts for commerce and British political ties, returning to India. In 1807 he undertook a second brief mission to Persia. He was again back to Persia in 1810. It was at this time that he produced this extravagant history of Persia. "He became a literary celebrity on the publication of his successful History of Persia in the summer of 1815, after which he visited Wellington with the army of occupation in Brussels and Paris." He returned to Persia again in 1823, then to Scotland by the following year. He wrote, Sketches of Persia, published in 1827. PROVENANCE: The Honourable Robert Curzon (1810-1873), K.L.S., K.C., H.B.M., was an English traveler, diplomat and author. Commissioner at Erzeroom [Erzurum] since 1842 and assigned to the British-Turkish-Persian-Russian boundary commission. See: David R. Fisher, The History of Parliament, 1820-1832; Jack Harrington, Sir John Malcolm and the Creation of British India, 2010, page 83; J.W. Kaye, Life and Correspondence of Sir John Malcolm, 2 vols. (1856); Rodney Pasley, Life of Major-general Sir John Malcolm, 1769-1833, (1982). REFERENCES: Brunet III, 1333 ["ouvrage importante"]; Farhad Diba, A Persian Bibliography: A Catalogue of the Library of Books and Periodicals in Western Languages on Persia (Iran) in the Diba Collection, (1981), p.85; Sirus Ghani, Iran and the West: a critical bibliography, vol. II, pp. 236-239; Graesse IV, 350; Raymond John Howgego II, Encyclopaedia of Exploration, 1800-1850, M7 (p. 383; MoÃ¯se Schwab, Bibliographie de la Perse, (1875), 360. Sotheby's-London, The Library of Peter Hopkirk: Central Asia, the Balkans and the Middle East, (1998), 963; Sotheby's, The Library of Robert Michael Burrell, (1999), 496. First Edition.

Title: The History of Persia, from the Most Early Period to the Present Time: containing an account of the Religion, Government, Usages, and Character of the Inhabitants of that Kingdom. In two volumes.

The History of Persia, from the Most Early Period to the Present Time: containing an account of the Religion, Government, Usages, and Character of the Inhabitants of that Kingdom. In two volumes.