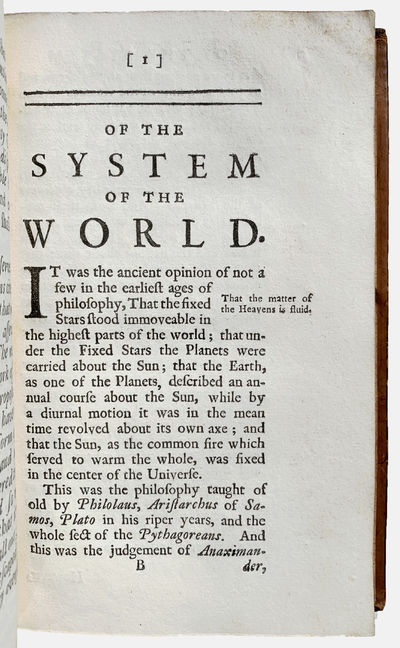 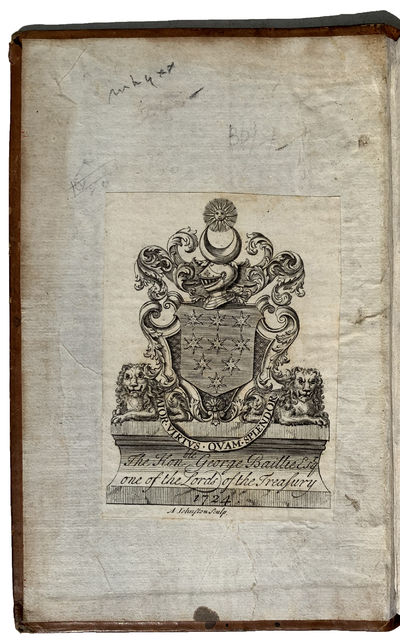 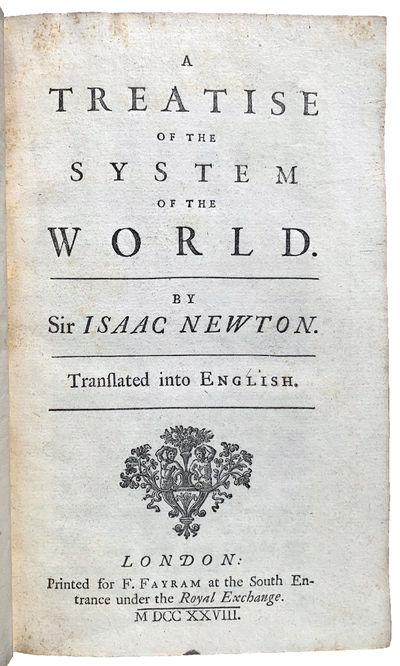 A Treatise of the System of the World. Translated into English.

8vo. xxiv, 154, [2] pp. 2 engraved plates, woodcut figs., errata page; last few leaves with marginal damp stain at head (text unaffected); a small amount of foxing. Original full calf, raised bands, gilt ruled compartments, gilt stamped red leather spine label; neatly rebacked to style. Armorial bookplate of The Hon.ble [Honorable] George Baillie, Esq., one of the Lords of the Treasury, 1724. NEAR FINE. FIRST EDITION IN ENGLISH OF THE PRINCIPIA BOOK III. "This is the first English translation of the De Mundi Systemate written, as Newton says, in the popular method that it might be generally read. It was originally intended to form the third part of the Principia. The interesting Preface, which was omitted in later editions, contains an extract from the beginning of the Principia and a short account of astronomy and the state it was in when Newton wrote. The name of the translator was withheld, but comparison with certain passages of Motte s translation of the Principia affords ample proof that he was also Andrew Motte. There is an interesting passage where Newton points to the possibility of Terrestrial Tidal Effects, which were discovered by Michelson in 1919, and another passage indicates the existence of the planet Uranus, which was actually first seen by Herschel in 1781." Babson, 18. / "The original draft of Book III, after contributing much to its successor, remained among Newton's papers to be published posthumously printed (1728) under the supplicate title The System of the World â€¦" (p. 216). "That Newton had in mind the remote classical antecedents of the Renaissance revolution in astronomy, and of his own dynamical investigations which had subsequently justified it, when he was in the full flow of writing the Principia, is evident from the grandiose opening to the original Book III of that book, suppressed in 1686 but printed immediately after Newton's death as The System of the World." (p.345) A. Rupert Hall, Isaac Newton. Cambridge (1992, 1996). / "Newton died on 20 March 1727 at the age of 84. His contemporaries' conception of him nevertheless continued to expand as a consequence of various posthumous publications, including The Chronology of Ancient Kingdoms Amended (1728); the work originally intended to be the last book of the Principia, The System of the World (1728, in both English and Latin); Observations upon the Prophecies of Daniel and the Apocalypse of St. John (1733); A Treatise of the Method of Fluxions and Infinite Series (1737); A Dissertation upon the Sacred Cubit of the Jews (1737), and Four Letters from Sir Isaac Newton to Doctor Bentley concerning Some Arguments in Proof of a Deity (1756)." â€“ Stanford University. ? DSB X; Babson, 18; Norman, 1593; Gray, 30; Wallis, 30. PROVENANCE: The Hon.ble [Honorable] George Baillie (1664-1738), Scottish politician and Member of the Parliament from 1691-1707 and in the British House of Commons from 1708 to 1734. "Baillie devoted his retirement to his friends and his family, to his books and his prayers; he had for many years been representative elder for the parish of Earlston, in which lies Mellerstain, and he remained a devout Presbyterian to the end." [DNB]. First Edition.

Title: A Treatise of the System of the World. Translated into English.

A Treatise of the System of the World. Translated into English.