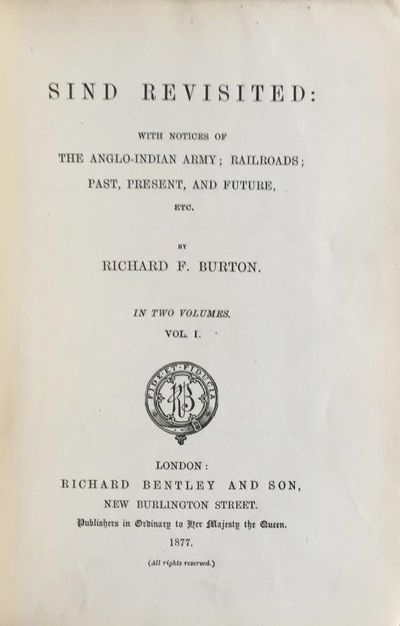 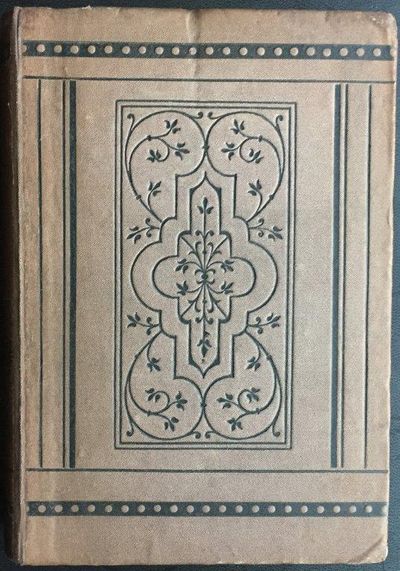 Sind Revisited: With notices of the Anglo-Indian Army; Railroads; Past, Present, and Future.

2 volumes. 8vo. xii, 343; iv, 331, [1] pp. Half-title (vol. I as called for). Dedication page to the memory of General Walter Scott, Bombay Engineers. Original mauve cloth stamped with black decorative pattern, gilt-stamped spines; neatly rebacked to match original, preserving original spines. Bookplates of George Merryweather. Very good. FIRST EDITION. This is essentially an annotated reprint of Burton's 1851 book, Scinde, or the Unhappy Valley. For this edition he made a return pilgrimage back to the Karachi area on the coast of present day Pakistan. // As with the first printing, this edition also includes the tale of the Persian girl (vol. I, pp. 119-123). The tale would be seemingly insignificant and yet Georgiana Stisted writes that the romance was true. Lovell seems to be correct in interpreting a poem written by Burton, previously unpublished, telling of the beauty and tragedy befalling this Persian princess. Lovell's position is that the story is fiction and the poem seems to support that theory it is not autobiographical because Burton never visited Persia "or other places mentioned in the poem", nor was he old when he wrote the piece. Seemingly he was interested in the process of story-telling and adding elements that imitated a Persian classic tale, using their own traditions, ideals and consequences. See: Lovell, pp. 59-64. // Farwell reports "â€¦ there is an interesting footnote in Sind Revisited relating to Charles Darwin. Darwin's Descent of Man had been published in 1871 and in the great controversy provoked by Darwin Burton was one of his defenders. Burton's footnote says that 'almost the only point on which I dare to differ with the learned Dr. Darwin's theory of development' is the question of female beauty among the races of man; Burton maintained that only white women are beautiful and appear so to all races." An unfortunate remark by Burton that is clearly false! Farwell continues with a more amusing tale of a conversation with an archbishop with whom he discussed Darwin's theories. Writes Farwell, "Spotting some monkeys scampering about, the archbishop said, 'Well Captain Burton, there are some of your ancestors.' Burton [retorted], 'Well, my lord, I at least have made some progress. But what about your lordship, who is descended from the angels?'" â€“ Farwell, pp. 323-4. // Casada 61; Penzer p. 94-95 note: Penzer erroneously records the title as "Scind" rather than the correct "Sind". See: Farwell, Burton, (1988), pp. 323-4. First Edition.

Title: Sind Revisited: With notices of the Anglo-Indian Army; Railroads; Past, Present, and Future.

Sind Revisited: With notices of the Anglo-Indian Army; Railroads; Past, Present, and Future.