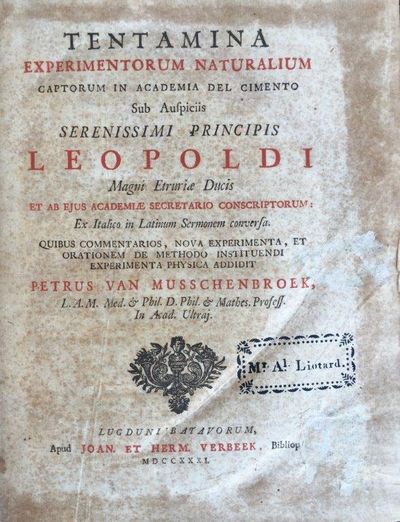 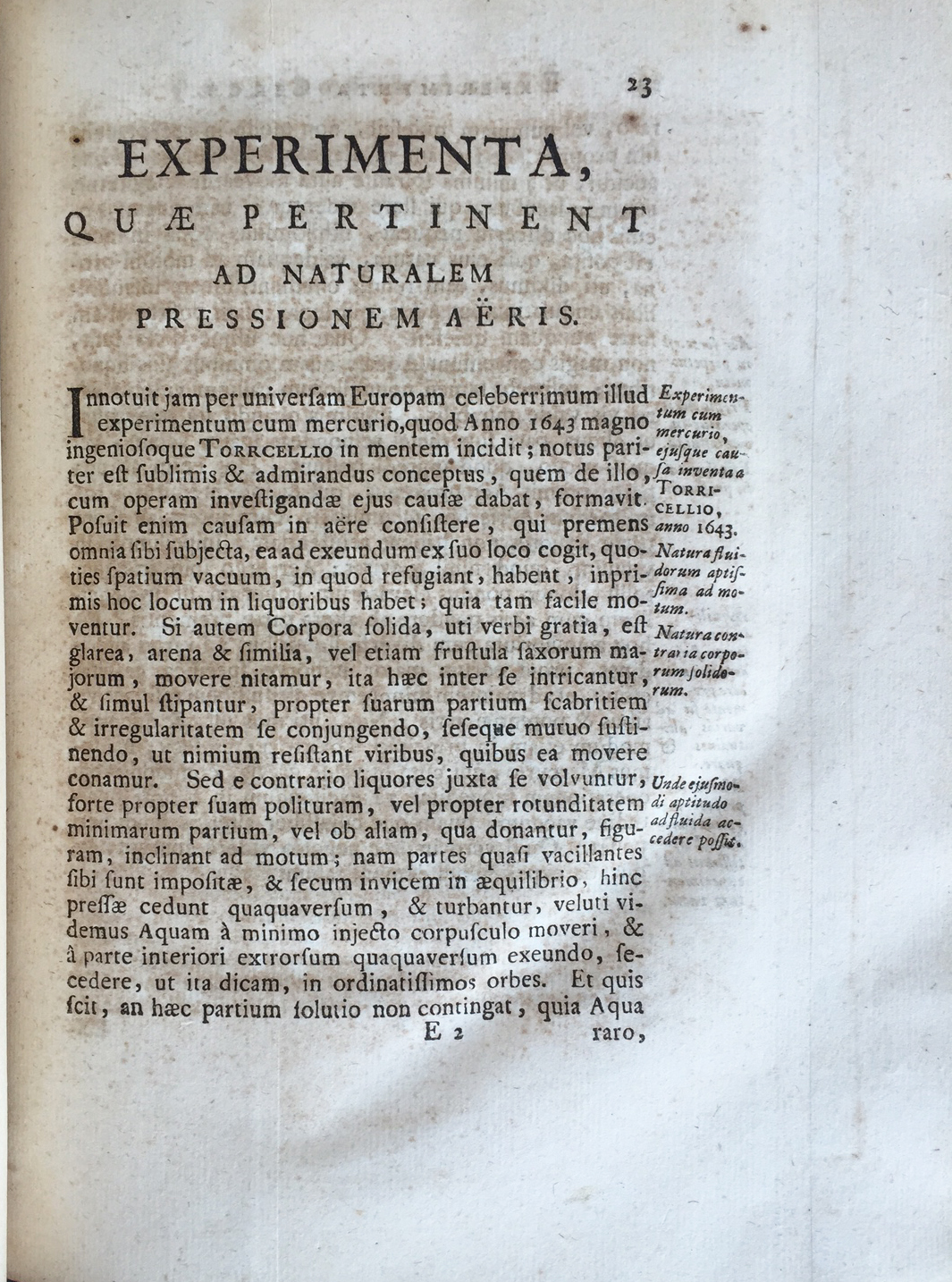 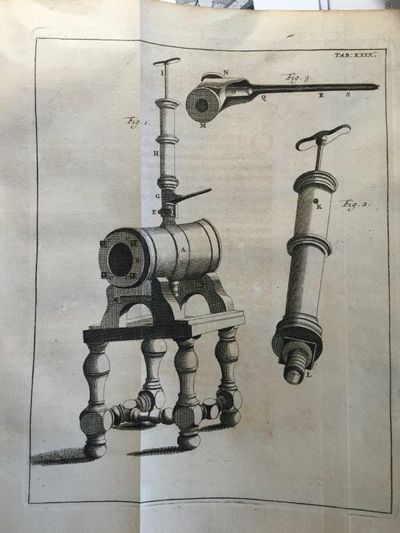 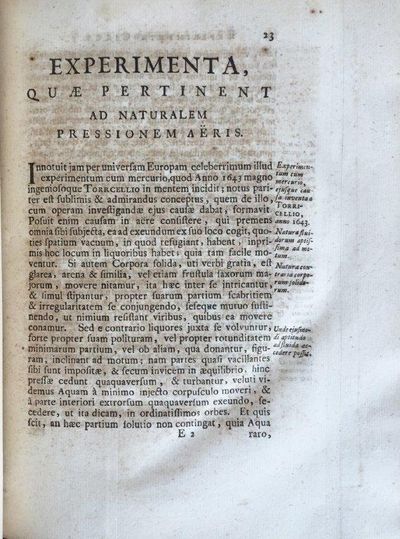 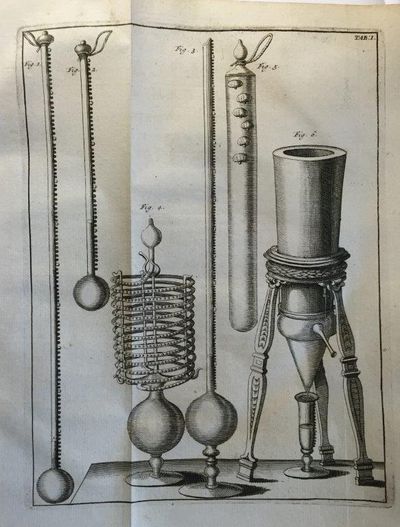 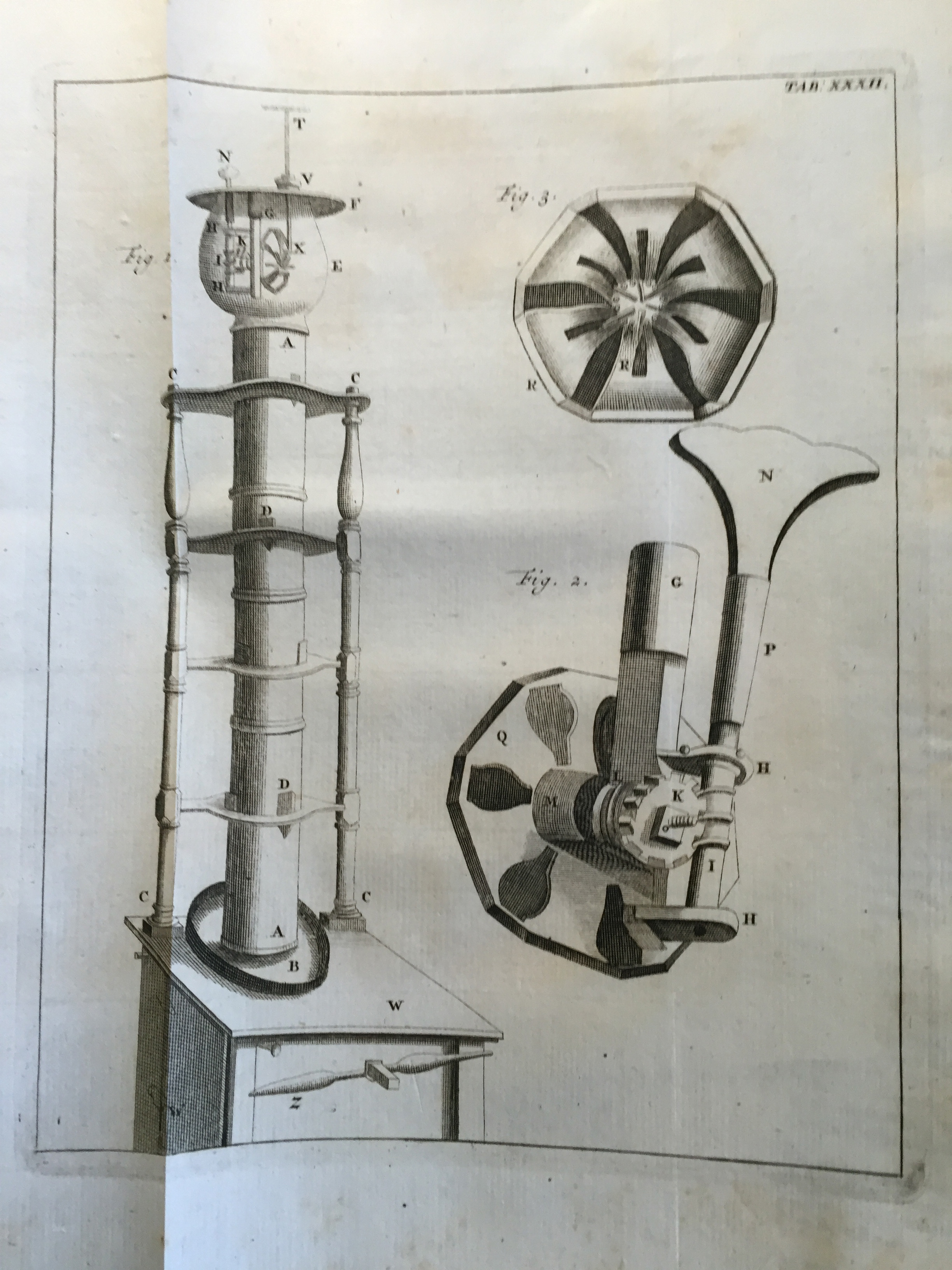 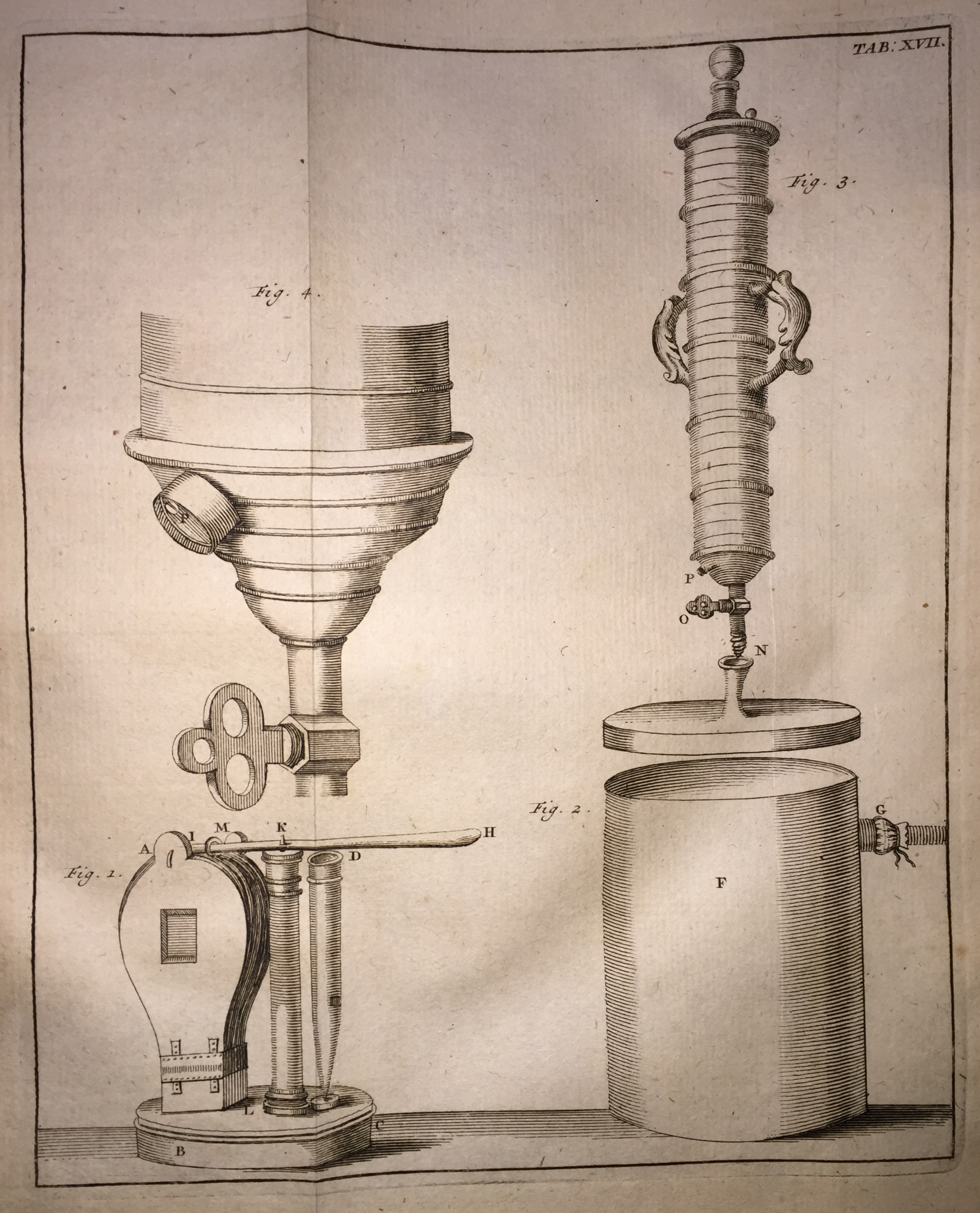 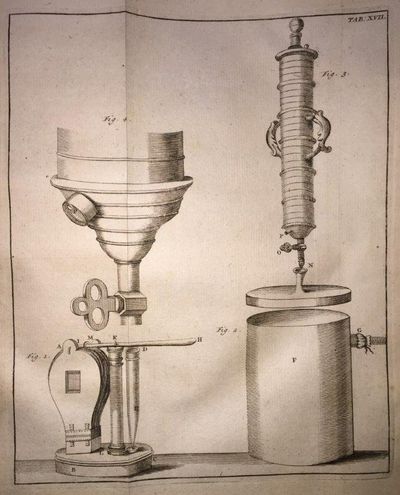 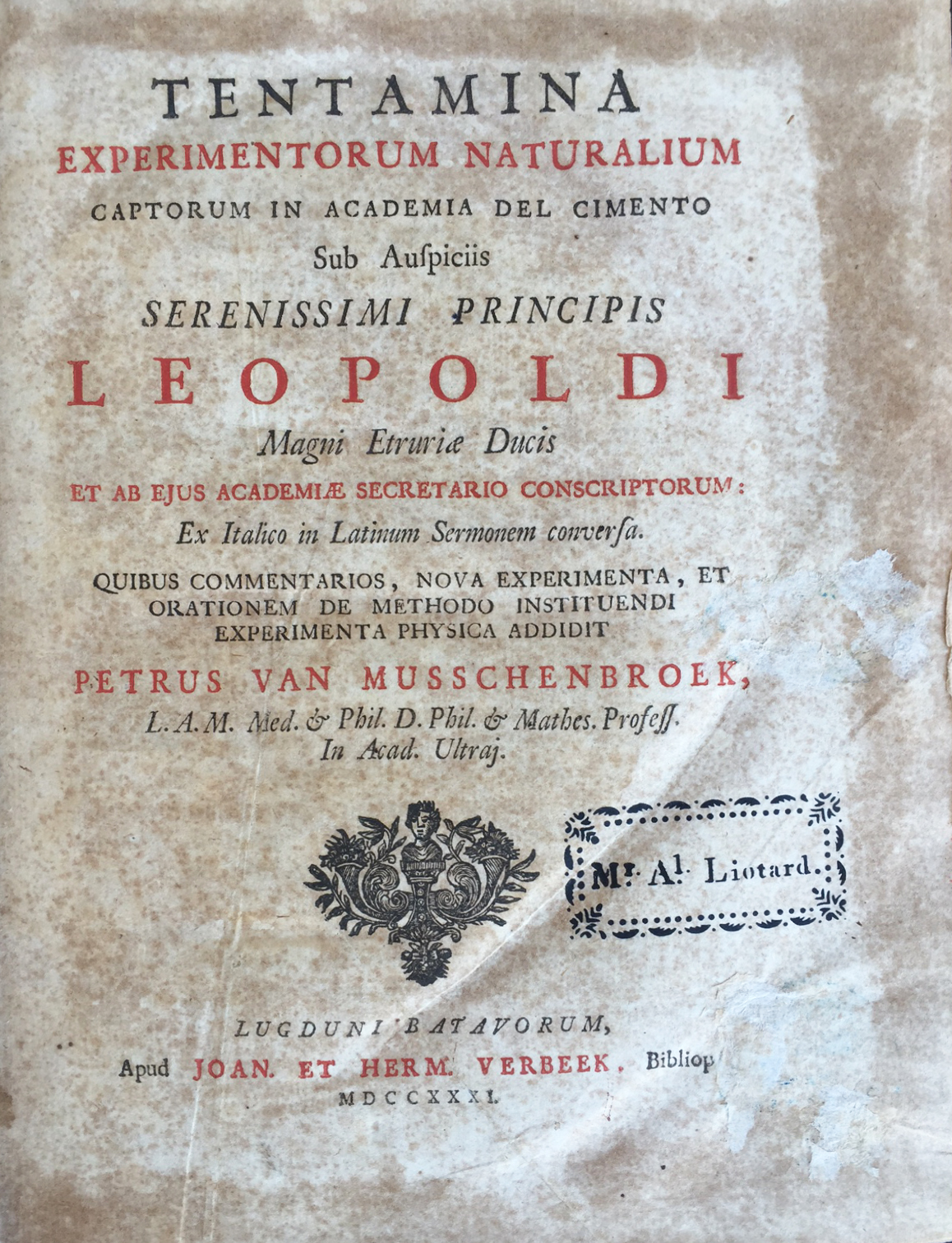 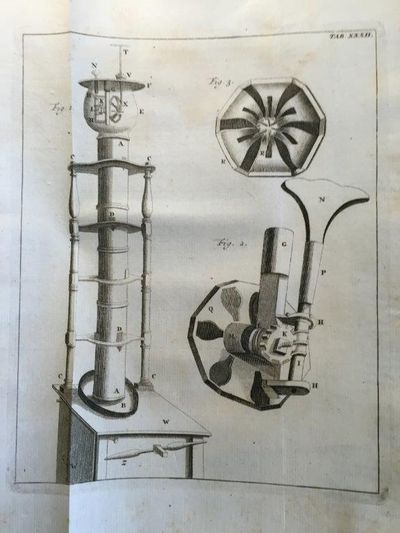 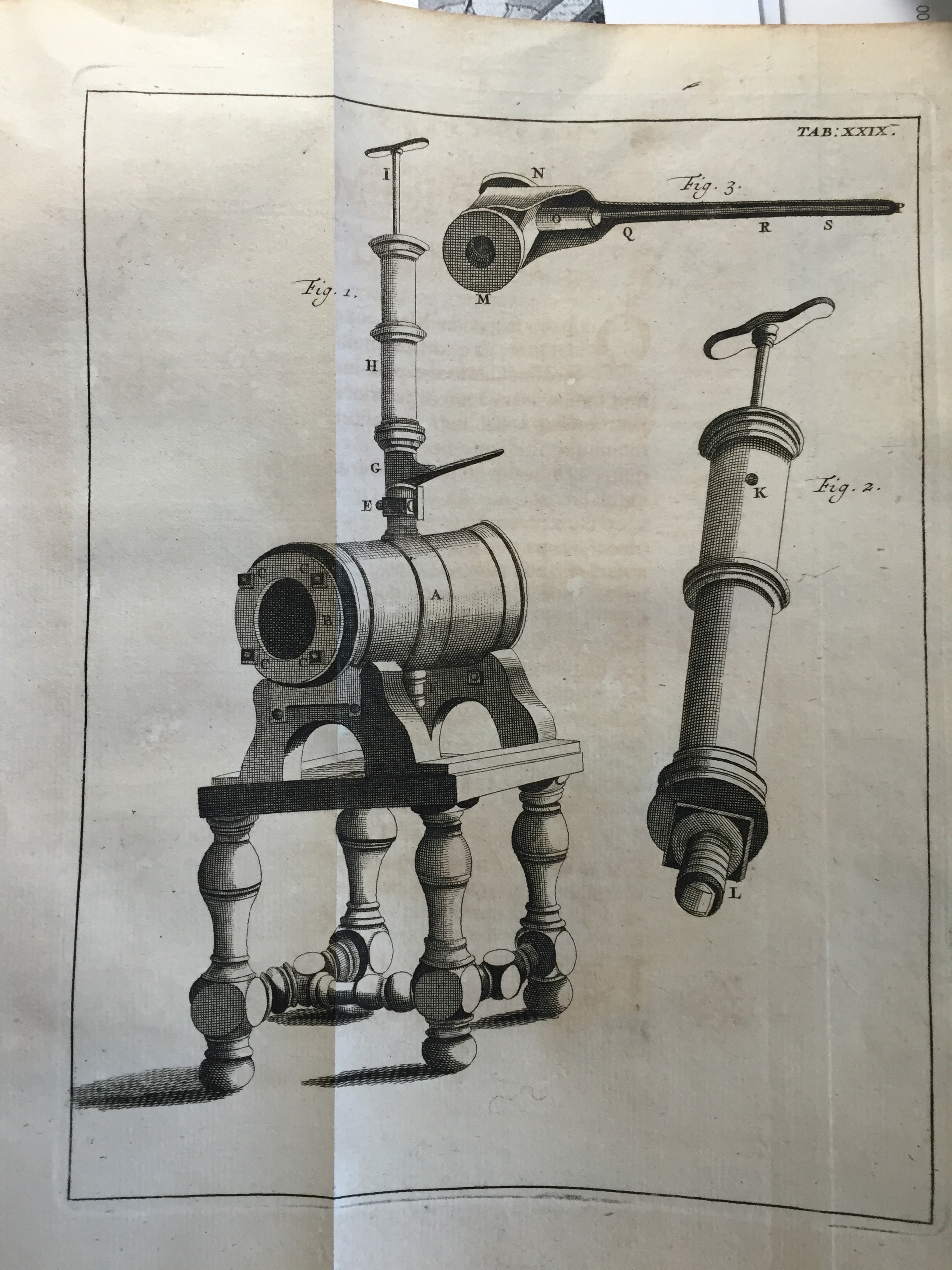 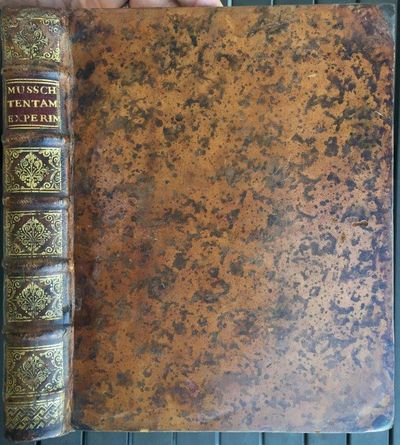 Two parts bound as one. 4to. [xvi], xlviii, [vii], 193, [1]; 192, [xiv] pp. Title printed in red & black, 32 engraved folding plates, 1 folding table, index; margin of p.99 trimmed [1 Â¾ x 2"] away. some foxing, browning of leaves (title very browned) due to offsetting. Beautifully preserved original mottled calf, raised bands, gilt spine compartments, red leather spine label. Ownership mark on title of "Mr. Al. Liotard." Very good. FIRST EDITION, incorporating the first Latin edition of the Saggi di naturali esperienze (1667) prepared by the Accademia del Cimento, Florence, with substantial additions throughout by Musschenbroek. Musschenbroek was one of the great physical experimenters and lecturers of the eighteenth century, and the teacher of Nollet. This book contains the first description of the pyrometer, an instrument for measuring the expansion of solid bodies under the influence of heat. Like many of Musschenbroek's books, the Tentamina contains fine illustrations and is concerned with experiments in measuring humidity, magnets and electricity, air pressure, the structure of ice, heat and cold, capillarity, optics, the motion of sound, etc. / "He devised many of his experiments, in the process consulting records of other experimenters, among them those of the Accademia del Cimento. Musschenbroek translated their accounts into Latin, adding reports concerning his own work (1731)." :: Encyclopedia.com / The work opens with Musschenbroek's Oratio de Methodo Instituendi Experimenta Physica, regarding his views on experimental philosophy, as inspired by Newton. "Underlying Musschenbroek's lectures demonstrated with experiments was the experimental philosophy the principal source of inspiration was Newton, but Galileo, Torricelli, Huygens, Reaumur, and others were important to this school." :: DSB, IX, p. 596. The Accademia del Cimento [Academy of Experiments] was founded in Florence in 1657. Among the founding members were Borelli, Steno, Redi, Cassini, Viviani and Torricelli, these final two being disciples of Galileo. This makes the Accademia older than either the Royal Society or the Academie des Sciences. Count Lorenzo Magalotti's text includes accounts of experiments on temperature and air pressure (including Torricelli's invention of the barometer), the velocity of sound and light, phosphorescence, magnetism, amber and other electrical bodies, the freezing of water, etc. The many fine plates in this translation illustrate the Accademia's work as well as Musschenbroek's own subsequent experiments. :: Wolf, History of science, I, pp. 55-59.2 parts in 1. / Musschenbroek (1692-1761), professor of natural philosophy and mathematics at Utrecht and, later, professor of experimental physics at Leyden. He was one of the most celebrated physicists and investigators of his time; the experiments he describes are classics in primary instruction. / "Musschenbroek's earliest account of electricity (1731), the estimable notes to his Latin translation of the Saggi, is fuller, more circumspect and less coherent than 's Gravesande's, which he later entertained favorably. Two curious points emerge from the notes. To resolve the discrepancy between the results of Boyle and Hauksbee, who respectively did and did not succeed in generating electricity in vacuo, Musschenbroek hit on an unprecedented and prescient idea; remarking that Boyle used amber and Hauksbee glass, he concluded that these substances have different electricities. . . The second point concerns repulsion. Musschenbroek records without emphasizing Hauksbee's observation that light bodies are sometimes repelled farther than they are attracted; he squeezes it into a note that also gives an excellent prescription for rubbing the tube :: always end with your hands together :: and a warning about atmospheric humidity. He does not recognize that the Saggi require updating about repulsion, and concentrates on the perplexing behavior of screens, the opacity of muslin and the transparency of glass." :: J. L. Heilbron, Electricity in the 17th and 18th Centuries: A Study of Early Modern Physics, (1979), p.242. / Wheeler Gift 276. Not in Bakken. [FULL TITLE: Tentamina experimentorum naturalium captorum in Academia del cimento sub auspiciis Serenissimi Principis Leopoldi, Magni Etruriae Ducis, et ab ejus Academiae Secretario Conscriptorum: Ex Italico in Latinum Sermonem conversa. Quibus commentarios, nova experimenta, et orationem de methodo instituendi experimenta physica addidit Petrus van Musschenbroek] First Edition.