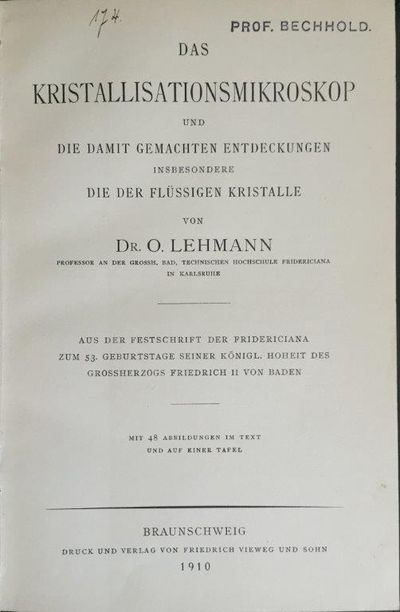 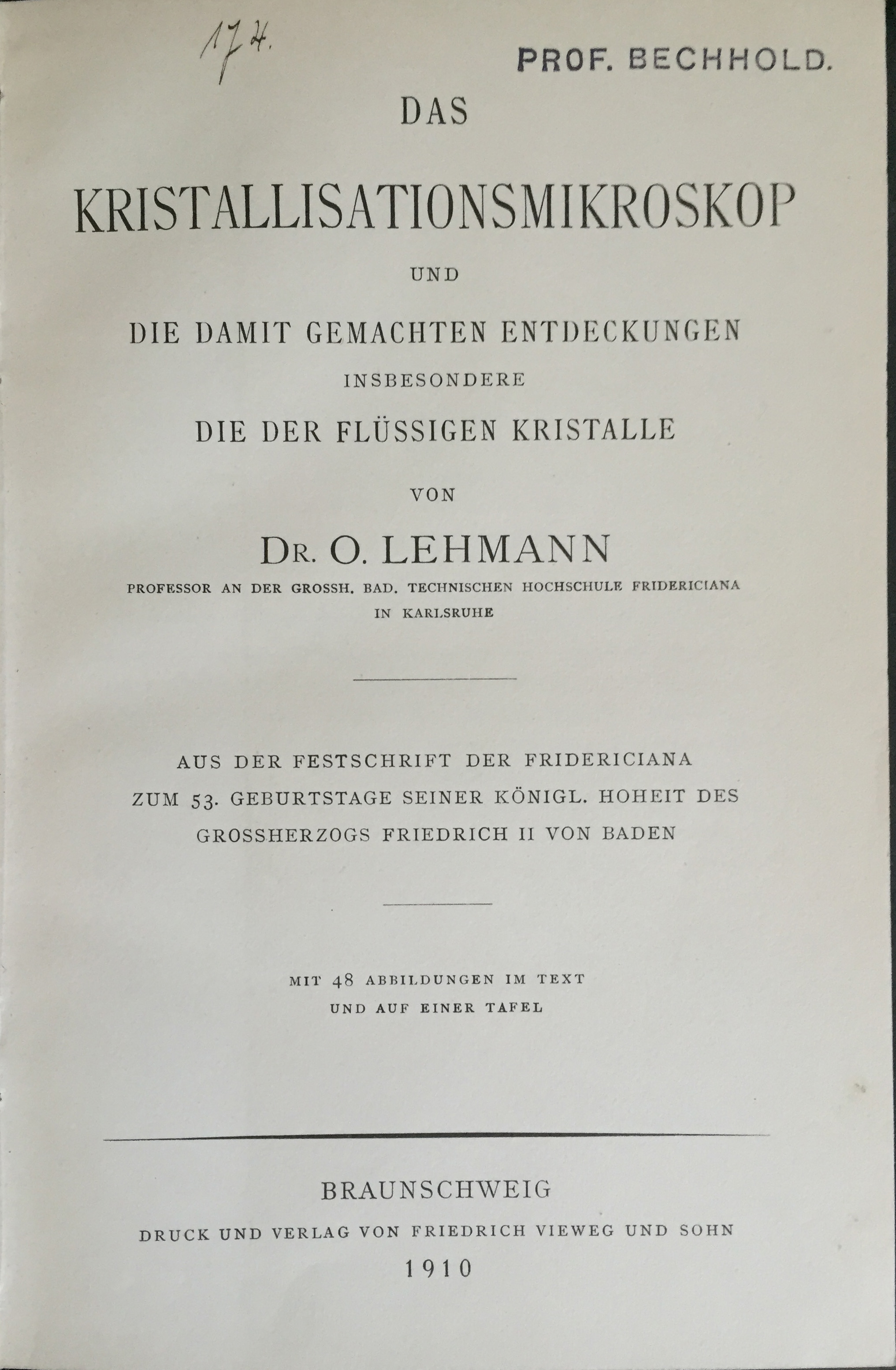 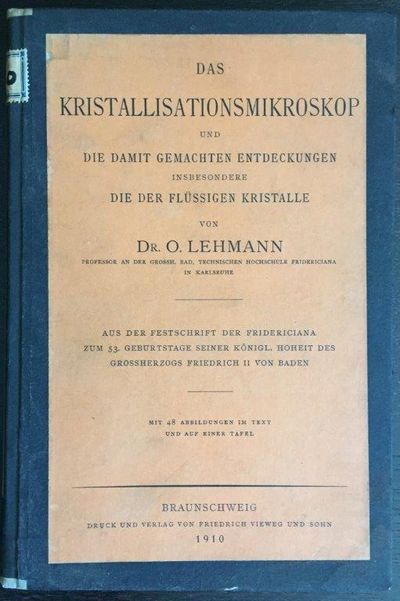 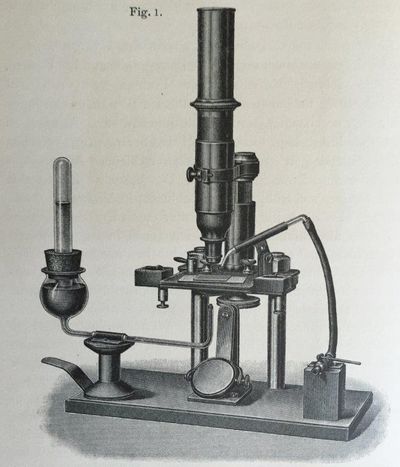 8vo. [viii], 112 pp. 48 figs. (incl. 1 folding table). Original orange printed wrappers mounted on later black boards [probably the work of W. Fornoff as evidenced by his mark]. Rubber-stamp on title of "Prof. Bechhold." and (on front pastedown) W. Fornoff, [buchbinder], Frankfurt am Main. First edition of the author's contribution using crystallization microscope as applied to liquid crystals, his most important and earlier discovery. His father introduced him to the microscope, and Otto later "spent a large amount of time and energy developing and improving (in a series of implementations) his invention, the heating stage microscope, that he called the crystallization microscope. :: Cristaldi, Pennisi & Pulvirenti. "Lehman discovered liquid crystals; substances which behave mechanically as liquids but display many of the optical properties of crystalline solids." In 1891 he wrote "Die Kristallanalyse." There was a huge controversy involving Friedrich Reinitzer and Lehmann against a solid-state chemist, Gustav Tammann, who was "old-style authoritarian . . . [and] established in a prime chair in Gottingen," . . . "Ferocious arguments continued for years . . . Lehmann, always eccentric and solitary, became more so and devoted his last 20 years to a series of papers on 'Liquid crystals and the theories of life." :: Twentieth Century Physics, American Institute of Physics Press, (1995), vol. III, p. 1540. His two most important works on liquid crystals were issued in 1904, Flussige Krystalle, being his comprehensive accounting, and 1911, Die neue Welt der flussigen Krystalle . . . / PROVENANCE: Dr. Heinrich Jakob Bechhold (1866-1937), of Frankfurt am Main, was a German chemist, known for his work on colloid chemistry in medicine, member of the Royal Institute for Experimental Therapeutics in Frankfurt am Main, and editor of DIE UMSCHAU, a review of science, technology, literature, & art, joint author of Die Kolloide in Biologie und Medizin, Dresden, 1912 and translated for the US as Colloids in Biology and Medicine, New York, 1919. He was also responsible for Bechhold's handlexikon der naturwissenschaften und medizin, 1894. During WWI he made several vaccines against cholera and typhoid. From 1916 he taught medical physical chemistry at Frankfurt University. Because he was Jewish the German Reich revoked his teaching license in 1935. In 1937 he committed suicide. / Otto Lehmann (1855-1922) was a German physicist and "father" of liquid crystal as well as a devoted microscopist. Otto was the son of Franz Xavier Lehmann, a mathematics teacher in the Baden-Wurtemberg school system, with a strong interest in microscopes. Otto learned to experiment and keep records of his findings. Between 1872 and 1877, Lehmann studied natural sciences at the University of Strasbourg and obtained the Ph.D. under crystallographer Paul Groth. Otto used polarizers in a microscope so that he might watch for birefringence appearing in the process of crystallization. / DSB, VIII, pp. 148-149, by John G. Burke; David J.R. Cristaldi, Salvatore Pennisi, Francesco Pulvirenti, Liquid Crystal Display Drivers: Techniques and Circuits, p. 2. First Edition.