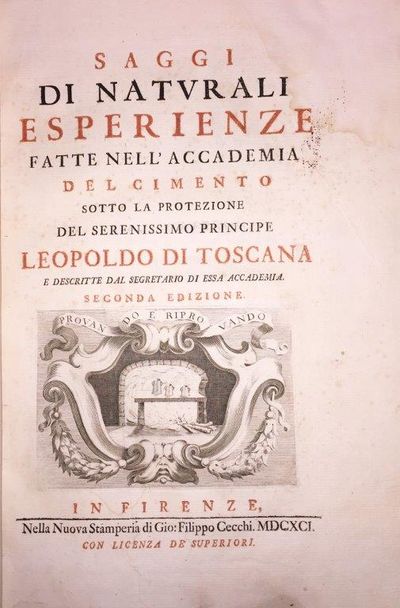 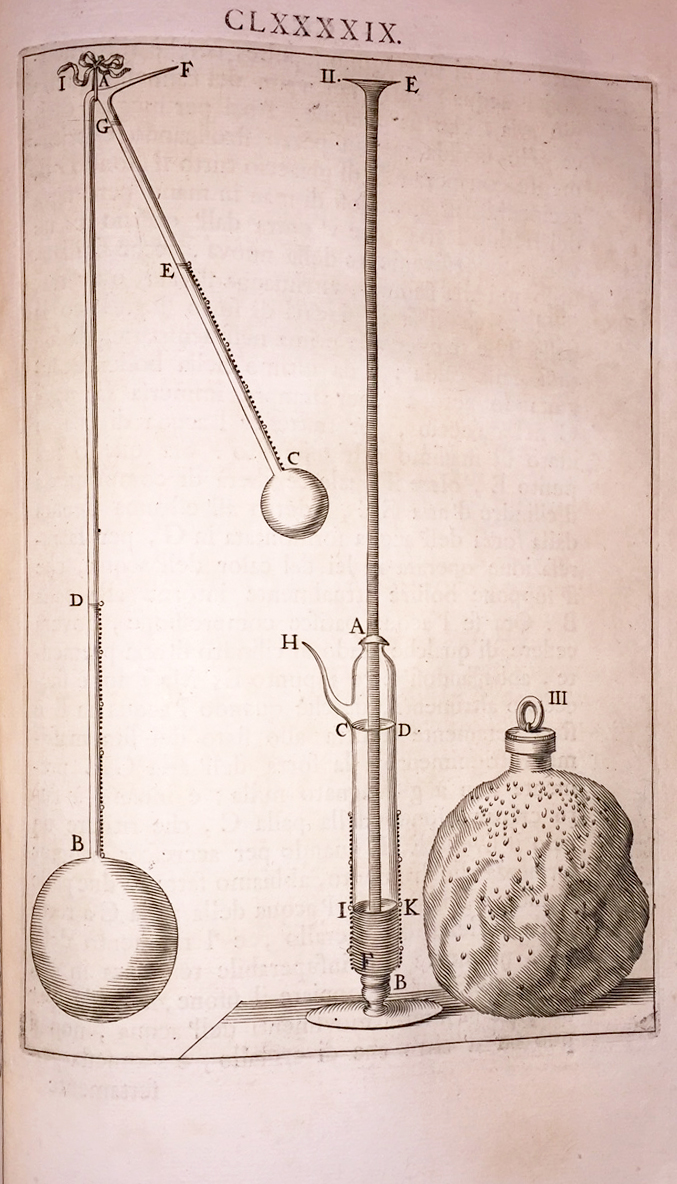 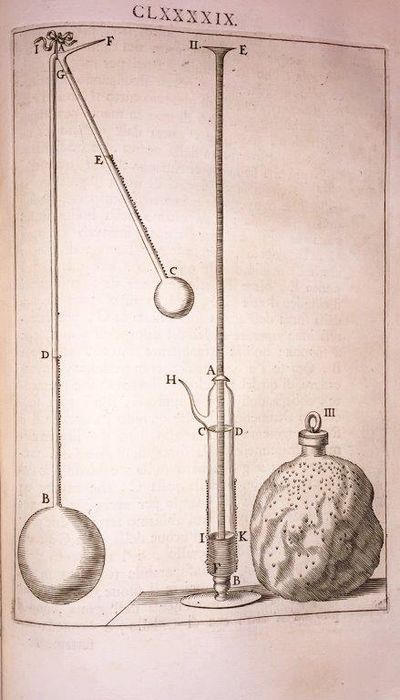 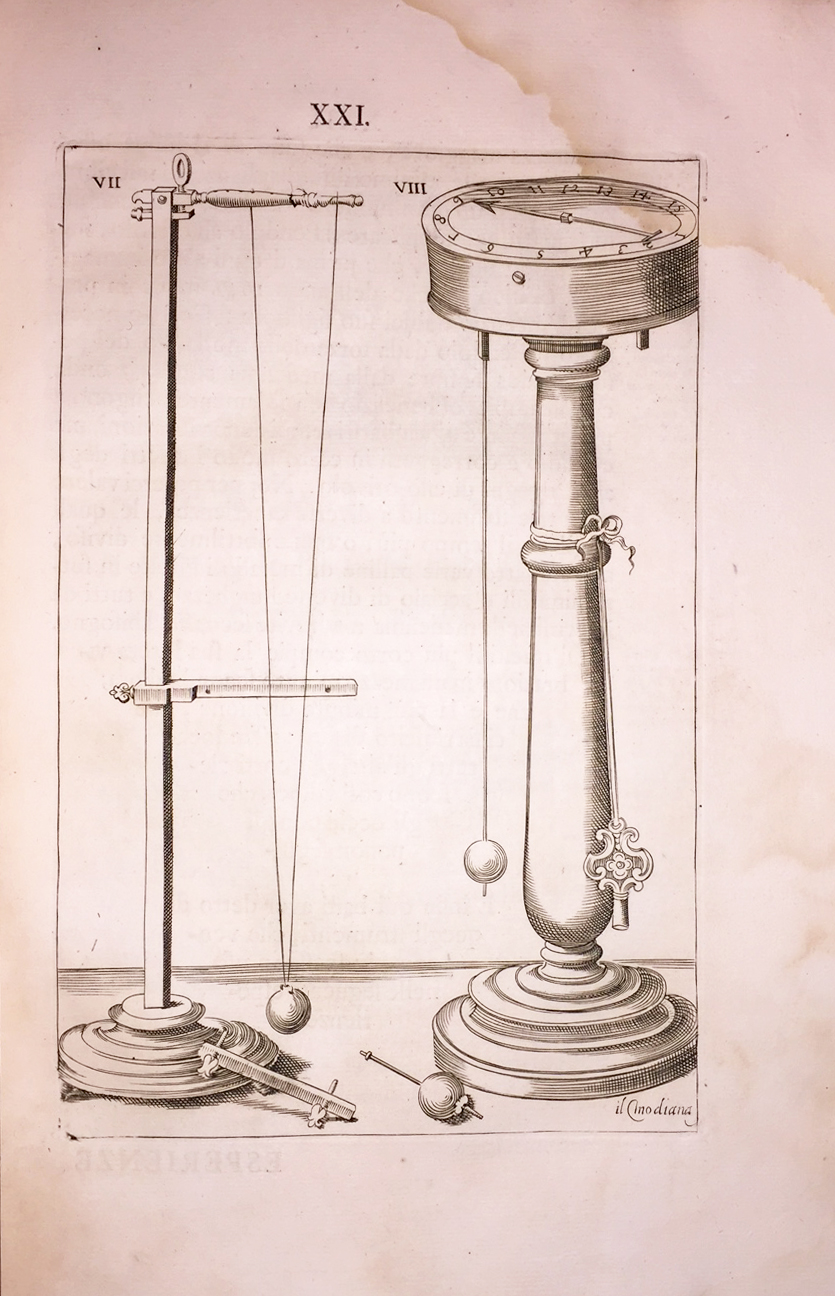 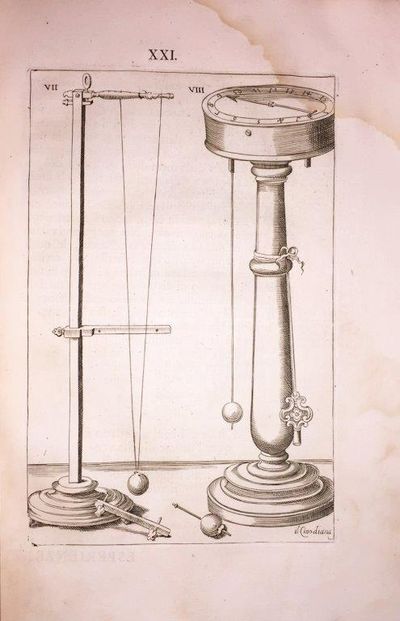 Large 4to. [xv], CCLXIX, [20] pp. Half-title, title printed in red & black, title vignette, 75 copper engraved plates, numerous woodcut initials and head & tailpieces, index; prominent waterstains to corners, lacks the portrait of Cosimo (some copies have the portrait, others do not). Later quarter vellum, marbled boards, black leather gilt-stamped spine label, vellum tips. Very good. Second edition, first printed in 1666/7. This marvelous work contains descriptions of experiments on air-pressure, freezing of water, an early account of Torricelli's invention of the barometer, thermometer, electrical and magnetic experiments, measurements of the velocity of sound and light, and experiments on heat and cold. It contains many large, full-page engravings of experimental apparatus used to conduct these early experiments in natural physics. The engravings on pages iii, vi, viii and xiii show Torricelli's thermometer with a column of liquid and capsules of various density liquids that will either float of sink, depending upon the surrounding temperature. Also known as a "termometro lento" (slow thermometer), this clever instrument is still marketed as a functioning curiosity today. / As the mechanism of the atmosphere exerting continuous pressure on the surface of the earth was unknown at that time, the experiments using a barometer and bell jar (pp. xxiv-xxxi) seem rather naÃ¯ve to us today. The members of the Academy couldn't determine why the mercury in the column didn't fall, once the barometer was 'shielded' from the surrounding atmosphere. What they failed to realize is that the air pressure inside the bell jar remained the same as the outside, since it had not been evacuated. Page lxxxxix depicts a curious experiment in which an organ pipe and a bellows to blow air through a pipe are encased in a vacuum chamber. The experiment demonstrated that when the chamber was evacuated, the pipe no longer made sound, even though the bellows were still forcing 'air' through the apparatus, therefore showing that air at normal pressure was a necessary component to produce sound. / The Academy of Experiments was founded in Florence in 1657 and flourished for only ten years (1657-1667) and presents the first group effort at scientific investigation on the part of scientists including such original minds as Viviani, Borelli, Steno, Redi, Cassini and Torricelli. Its moving spirits were two of Galileo's most distinguished disciples, Viviani and Torricelli. The necessary financial support came from the two Medicis, the Grand Duke Ferdinand II of Tuscany and his brother Leopold; both of them had studied under Galilei. More than a decade before the formal institution of the Academy, the two Medici brothers had started a laboratory, well equipped with such scientific apparatus as was then obtainable. :: Wolf. / "This collection contains papers describing experiments on light, sound and electricity. Amber rubbed in vacuo . . . magnetic attraction across a vacuum . . . magnetic screening . . . rubbed amber and gems . . . discharging action of flames . . . electrical attraction is mutual. . ." :: Wheeler. / Barchas-Stanford 1345 (1666/7 ed.); Boffito, 'Gli strumenti della scienza', pp. 133-134; Brunet, V-29; Catalogo Bibl. Mediceo-Lorenese, 569; Cinti 163; Dibner, Heralds of Science, 82; DSB, IX, p.3 [Magalotti]; Gamba, 853; Krivatsy/NLM p.25 (1666/7); Maylender, Michele, "Storia delle Accademie d'Italia," (1926-30), II, pp. 7-16; Michel, V-76; Riccardi, II, 407; Wellcome III, p. 23; Wheeler 196 (1684 ed.); Wolf, The History of Science, Technology and Philosophy, I, p. 55. This edition not in Bakken (but has the 1684 translation). First Edition.